Your Greek Islands Cruise
9 Night Cruise from Venice to Athens Onboard the brand New Norwegian Viva in an Interior Stateroom
Onboard Dining Across A Range Of Complimentary Venues
Onboard Entertainment including Live Music & Performances
Onboard All Port Taxes & Charges
Bonus Onboard Beverage Package with Cocktails, Spirits, Wine, Beer & Soft Drinks
Bonus Onboard Wifi Package
Bonus Onboard Specialty Dining Package
Bonus US $400 Shore Excursion Credit
Bonus Onboard Prepaid Gratuities

Welcome to Milan, a metropolitan city in Italy’s northern Lombardy Region. Enjoy a 3 night hotel stay to discover this enchanting city. Milan is said to be Italy’s city of the future, where money talks, creativity is big business and looking good is an art form. Milan is home to Leonardo da Vinci’s mural of The Last Supper, hidden away on a wall in Basilica di Santa Maria delle Grazie. It is a sight not to be missed. When you are not gazing at the masterful displays of da Vinci’s work, spend your day strolling through the cobbled streets, taking in the cities spectacular fashion. Visit the Duomo, an extravagant gothic cathedral and Galleria Vittoria Emanuele II, followed by a spot of aperitivo hopping. Enjoy a 3 night stay to explore this enchanting city.

Discover Lake Como in Italy’s beautiful Lake District, just a short distance from Milan. Nestled between the huge snowcapped Alps that rise up from its shores is the fashionable lakeside town, Como. Enjoy a full day exploring this area with your guide.

Savour your final night in Milan.

Enjoy a scenic rail journey from Milan to Venice and enjoy a 2 night stay to explore at your leisure. Venice, a romantic destination in itself, is an artisan masterpiece. The city is built on 118 small islands, separated by canals, in a shallow lagoon in the Adriatic Sea. This UNESCO World Heritage Site overflows with beauty – from the gondola-lined canals and ancient marble palaces to historical architecture of St. Mark’s Basilica and the Palazzo Contarini del Bovolo. Visiting Venice is like being in a fabled land, a scintillating mix of culture, history, and water.

Embark your 9 Night Ocean Cruise from Venice (Trieste) to Athens Onboard the brand new Norwegian Viva, launching in June 2023.

Known for its colourful mosaics adorning many of its central buildings, much like the infamous Bascilica di San Vitale, Ravenna, Italy is a spectacularly beautiful city in Italy.

This Mediterranean city on the eastern shores of the Adriatic has a long and eventful history dating back to the awesome Diocletian’s Palace (circa 295 A.D.) in the centre of the city. Split offers cruise guests a wealth of exciting places to visit, from the majestic cathedral and marble streets in the centre of town to the harbour area with its cafe-filled promenades and views of coastal mountains.

Despite the magnificent 13th century walls that surround the city, Dubrovnik is one of the most welcoming cruise destinations in all of Europe. Dubbed “the pearl of the Adriatic”, this Croatian city exudes romantic charm and beautiful scenery with its shimmering marble streets, centuries-old buildings capped by bright orange roofs and lovely beaches ensconced between awesome rocky ledges.

One of the lushest of the Greek Isles, Corfu is rimmed in dramatic blue waters and topped with tranquil hillside villages. A collection of quaint cafes in the town of Corfu feels very continental, but the island’s secluded coves and sandy beaches could only be found in the Greek Isles.

Disembark Norwegian Viva in Athens where your 2 night hotel stay awaits you. Welcome to the birthplace of democracy, arts, science, and philosophy of western civilisation. Home of Plato, Socrates, Pericles, Euripides, Sophocles, Aeschylus. Athens is one of the world’s oldest cities. Its recorded history spanning around 3.400 years and it is being inhabited since the 11th millennium B.C. E. Today, under the shadow of the Parthenon, the contemporary urban scenery of the sprawling city reflects its exciting history, its multi-cultural modern personality as well as the infrastructure and facilities.

Farewell Athens today as you board your flight home or ask us about our flexible flights & extend your stay.

Upgrade to a Balcony Stateroom from only $999*pp

Live it up onboard Norwegian Viva, a world-class ship overflowing with experiences beyond expectation.

Journey to bucket-list destinations across the Greek Isles, Mediterranean, Caribbean and beyond aboard the stunning Norwegian Viva. Sister ship to the revolutionary Norwegian Prima, Viva is designed for guests to live life to the fullest. Brimming with incredible experiences that bring guests closer to the horizon, a voyage onboard the Norwegian Viva is one you’ll remember forever.

Get up close and personal with the sea as you explore the unique experiences along Norwegian Viva’s iconic Ocean Boulevard. Here, you can enjoy 360 degrees of stunning ocean views, walk across the water on the glass Oceanwalk bridge, swim up to the horizon in one of the pools of Infinity Beach or relax under a starry sky beside a firepit at the Indulge Outdoor Lounge. Many of Norwegian Viva’s incredible dining venues can also be found here.

With so many thrilling attractions onboard Norwegian Viva, there’s something to excite everyone. Race the sea breeze on Viva Speedway, the world’s first three-level racetrack at sea, exclusive to the Prima class. Take the plunge by whooshing down The Drop, the fastest and first 10-storey free-fall dry slide on a cruise ship. Try for a hole in one at Tee Time, an interactive mini-golf experience, or immerse yourself in the virtual world of Galaxy Pavilion, with everything from escape rooms to racing simulators. At the Aqua Park, guests can brave the thrilling tidal wave waterslide or simply relax by the pool with a frozen drink in hand.

There’s no better opportunity to indulge than on a cruise holiday. If you need a break from all the thrills, soak in the serenity of Vibe Beach Club, exclusive to guests aged 18 years and over. Enjoy drinks from the full-service bar, take a dip in the infinity hot tub or simply enjoy the resplendent ocean views. Even better, stay in one of the Haven Suites to take advantage of the personal service of a 24-hour butler and world-class amenities exclusively reserved for guests of The Haven.

Norwegian Viva offers over 20 dining venues, so you can trust that any onboard craving will be satisfied. Indulge Food Hall alone has 11 distinct dining concepts, including southern favourites at Q Texas Smokehouse, classic Indian dishes at Tamara and delectable desserts at Coco’s. Other onboard dining options include Onda by Scarpetta, which serves modern Italian fare and Los Lobos, where you can dine on traditional Mexican flavours. So, live it up onboard Norwegian Viva, the ship that has it all.

Travel based on Cruise Departure 19 October 2023

“Prices are per person twin share in AUD, and subject to availability and currency fluctuations.
Pricing is subject to change until reservation is confirmed. Accommodation is subject to change and availability.
Surcharges may apply. Flights may not be direct or operate daily. Itinerary and inclusions are subject to change.
Disruptions to cruising and itinerary may occur. ^Flexible Booking Conditions:  At any time prior to the due date of your second deposit, you have the option to: 1. Change your departure dates OR 2. Cancel your booking, in which case My Cruises will hold all funds paid in the form of a credit; which can used for a future booking with My Cruises.  Changes made after the second deposit payment are subject to standard cancellation terms & conditions. Departure date changes are subject to availability & blackout dates. No refund will be given if you are not able to change your departure date as a result of alternate dates not being available. Your My Cruises Specialist will provide further details at time of booking.  Shore excursions and other items such as alcoholic beverages & laundry are an additional cost. Should gratuities or hotel service charges not already be included in your package, these are mandatory and charged by the cruise line to your onboard account on a day by day basis.
Itineraries are subject to change at any time without notice.
Please note – onboard benefits valued at has been converted into Australian Dollars from the onboard currency. Details of the onboard currency can be provided by your consultant at the time of enquiry.
Due to security reasons, all guests must be on board 2 hours before sailing.
Disembarkation usually begins 2 hours after docking.
These fares/prices may change due to availability or currency fluctuations.
Please note upgrade amounts advertised may be based on lead in obstructed view staterooms.
Please note that a majority of US based (including Hawaii) hotels impose a daily mandatory additional charge that is automatically added to your bill by the hotel. There are various inclusions provided for these resort fees. These fees are separate from, cannot be prepaid prior to arrival and are in addition to our advertised package.
Please note many European hotels charge a nominal daily City Tourist Tax which is utilised locally for tourism-related purposes and to improve the local infrastructure in the area. This tax is collected by the hotels directly from the customer and the amount can vary by region, hotel size or type. Local regulations state this must be collected by the hotel and cannot be prepaid.
All passports, vaccinations and visas are the responsibility of the travelling guest to secure prior to departure from Australia. ” 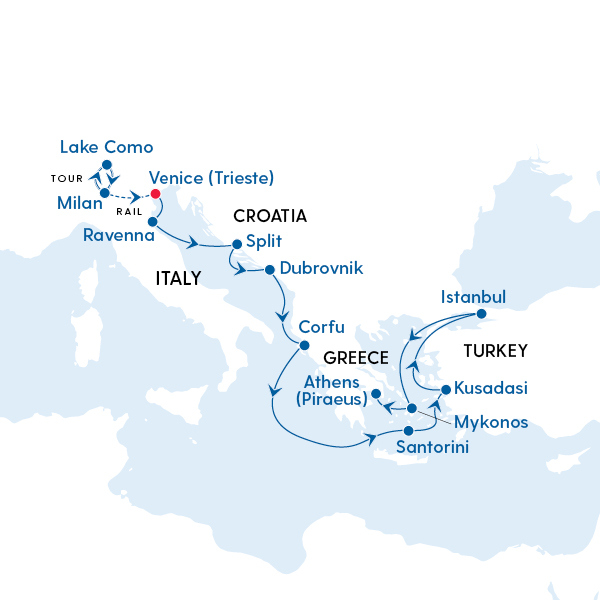