Day 1 – 2: Barcelona, Spain
Welcome to the cultural hub of Spain, Barcelona! Explore the stunning sights such as the Sagrada Familia and enjoy the local tapas for some truly delicious cuisine.

Day 4: At Sea
Your day at sea will allow you to take full advantage of everything the ship has to offer. Seek out hidden treasures and make the most of the facilities onboard. All of the ship’s activities can be found in the vessel’s daily newsletter. If relaxation is on your mind then your sea day will allow you to sit back, soak in ship life and watch the world as it floats by you.

Day 5: Gibraltar, British Overseas Territory
Enjoy stunning views from the Rock, 400 metres above the city. Browse the many shops and head to a local pub for some delicious fish and chips. Gibraltar is a British Overseas Territory and headland, on Spain’s south coast. It’s dominated by the Rock of Gibraltar, a 426m-high limestone ridge. First settled by the Moors in the Middle Ages and later ruled by Spain, the outpost was ceded to the British in 1713. Layers of fortifications include the remains of a 14th-century Moorish Castle and the 18th century Great Siege Tunnels, which were expanded in WWII

Day 6: At Sea
Enjoy a relaxing day at sea.

Day 7: Marseille, France
Founded in 600BC, Provence (Marseille) is the oldest city in France. The city is filled with terracotta-roofed buildings, while visits to the city of Avignon and quiet locales of Le Baux and Aix en Provence are must-do’s.

Day 9: Livorno (Tuscany), Italy
Livorno is an Italian port city on the west coast of Tuscany. It’s known for its seafood, Renaissance-era fortifications, and modern harbor with a cruise ship port. Livorno port provides easy assess to visit the Tuscany region. Florence is a beautiful city best explored on foot, however, if you wish to venture away from the city, your starting point for a day trip is to see the Leaning Tower of Pisa, explore the Tuscan villages, or the colourful seaside towns of Cinque Terre.

Day 10: Civitavecchia (Rome Port), Italy
Civitavecchia is a coastal town northwest of Rome, in Italy. Built in the 2nd century, the Port of Civitavecchia still retains some of its original features, like the Roman Dock. The port area also includes the 16th-century Michelangelo Fort. Nearby, the National Archaeological Museum displays bronze and ceramic artifacts. Northeast of town is the Terme Taurine, the ruins of a Roman thermal bath complex.

Day 11: Naples, Italy
Cruise to Naples, located on Italy’s stunning Amalfi coast, a city embellished in history. Touring around Naples’ grand piazzas, cathedrals, and castles in the old centre will fill that cultural need. Pompeii is not too far either, a dashing city that boasts diverse cultural offerings and charming streets.

Day 13: Heraklion (Crete), Greece
Wander the atmospheric old alleys, marvel at the massive Venetian walls, and explore The Palace of Knossós in this beautiful port city Heraklion – the capital of the Greek island of Crete.

Day 14: Kusadasi (Ephesus), Turkey
Ephesus was an ancient Greek city on the coast of Iona in Turkey. It is said that this city of Ephesus was created by Androclosthe son of the king of Athens. Take a trip to see the 10th-century ruins there including the Temple of Artemis a shrine of the goddess Artemis. Ephesus is also said to be home to the House of Virgin Mary, as well as the St John Basilica.

Day 15: Istanbul, Turkey
Dive into this historic city, with dramatic architecture & colourful streets. Do not miss The Hagia Sophia constructed in 537 AD this monumental structure is still standing as a museum, see the outstanding tile work of The Blue Mosque. The Grand Bazaar is a wonderful marketplace is a kaleidoscope, of colourful lamps & spices. Descend below ground to see the mysterious Basilica Cistern, the cities ancient reservoir.

Day 16: Mykonos, Greece
Explore this quintessential Greek island with pristine white houses with blue accents and beautiful beaches. Once you’ve seen one of the famous sunsets, you’ll understand why this is the most visited island in the region!

Day 17: Piraeus (Athens), Greece
Welcome to Piraeus, the port city of Athens. It is the oldest city in Greece, a guaranteed highlight is the mystical Acropolis, perched high in the hills. Just because this city is vintage don’t think that you’ll be stuck in the past – it is juxtaposed against a modern city filled with shopping, restaurants, culture, and beautiful art.

Awarded as the Top 5 Mega Cruise Line, Princess Cruises boasts a family of first-rate ships & the Enchanted Princess is no exception. A royal-class vessel, Enchanted Princess oozes style & luxury. Become acquainted with delectable dining as you choose from a range of culinary delights freshly prepared by talented chefs on board. Whether you’re after a casual pizzeria, fancy high-tea, or fine French dining, you will not be disappointed!

The adventure continues with the myriad of onboard entertainment! Catch a movie under the stars, marvel at musical productions, meander through the art gallery, hit the sports center, or check the little ones into the awesome kids’ program while the adults let their hair down at the Top Deck parties. For ultimate rejuvenation, book in at the tranquil day spa or simply retreat to your plush suite, designed for total comfort & luxury.

Travel based on Cruise Departure 15 April 2023 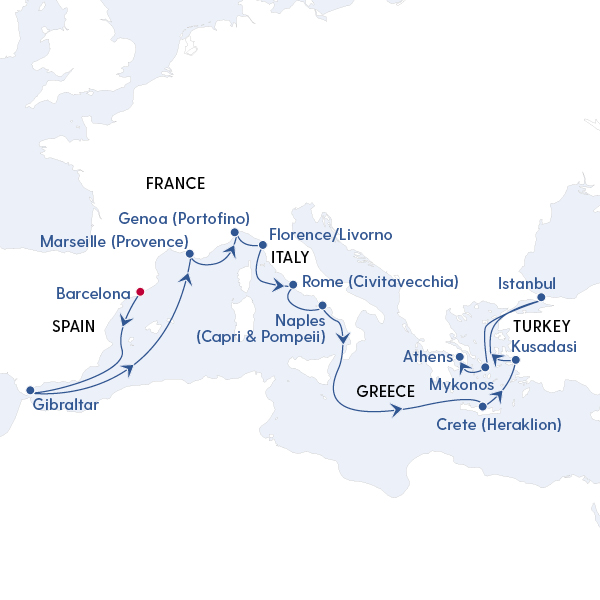