On arrival at San Francisco International Airport make your own way to your hotel for your 2 night stay.

San Francisco, in northern California, is a hilly city on the tip of a peninsula surrounded by the Pacific Ocean and San Francisco Bay. It’s known for its year-round fog, iconic Golden Gate Bridge, cable cars, and colourful Victorian houses. The CBD’s Transamerica Pyramid is its most distinctive building, offering unparalleled views of the city. You’ll find Alcatraz Island, the site of the notorious former prison, in San Francisco bay.

Day at leisure to explore the city of San Francisco.

On check out of your San Francisco hotel make your way to the Airport or your onward journey to Las Vegas. On arrival at the Las Vegas Airport make your own way to your hotel.

Las Vegas is a city that must be seen to be believed, located in Nevada’s the Mojave Desert. Vegas is a resort city famed for its vibrant nightlife, with 24-hour casinos and other entertainment options as its focal point. The infamous Strip is just over 4 miles long and filled with all things Vegas-esque. Home to themed hotels with elaborate displays such as fountains synchronised to music as well as replicas of an Egyptian pyramid, the Venetian Grand Canal, and the Eiffel Tower.

Prepare for a Wild West adventure traveling through the fearsome Mojave Desert by coach to visit the Grand Canyon.

Grand Canyon National Park, in Arizona, is home to much of the immense Grand Canyon, with its layered bands of red rock revealing millions of years of geological history. Viewpoints include Mather Point, Yavapai Observation Station and architect Mary Colter’s Lookout Studio and her Desert View Watchtower. Lipan Point, with wide views of the canyon and Colorado River, is popular, especially at sunrise and sunset.

Day at leisure to explore the city of Las Vegas.

Fly from Las Vegas to Vancouver and enjoy a 2 night stay to explore this amazing city.

On check out of your Vancouver hotel make your own way to the cruise terminal for your cruise to Hawaii with Royal Caribbean International onboard Ovation of the Seas.

Seattle sits on the slip of land between Puget Sound and Lake Washington, with the Olympic and Cascade Mountains serving as a dramatic backdrop for this cosmopolitan city. Soar up the futuristic Space Needle and experience the views atop this stunning landmark created for the 1962 World’s Fair.

Explore the Big Island and the youngest volcano in the region, Mount Kilauea. You’ll be in for a show with this active volcano flowing fresh molten lava. It gives a new meaning to fireworks!

Explore the Big Island and the youngest volcano in the region, Mount Kilauea. You’ll be in for a show with this active volcano flowing fresh molten lava. It gives a new meaning to fireworks!

Welcome to Oahu, the most populated island of Hawaii, known as ‘The Gathering Place’. There is so much to do on Oahu, from the shops, restaurant and fantastic nightlife of Waikiki, to the historical sights of Pearl Harbour and the natural wonders of the North Shore.

Disembark your cruise this morning & make your way hotel & enjoy the best Honolulu has to offer.

Day at leisure to explore the city of Honolulu and its surroundings.

On check out of your Honolulu hotel make your own way to the airport for your return flight to your selected Australian capital city.

Step aboard the Royal Caribbean’s newest addition to their Quantum Class of ships—the Ovation of the Seas.

Pay homage to the technological hubs you cruise past on this innovative ship. Get a drink created with laser precision at the Bionic Bar, feel the wind rush through your hair in the RipCord by iFly® skydiving simulation, or ascend over 300 feet above sea level in the breathtaking North Star capsule.

With adults-only retreat spaces and kid-friendly bumper cars, roller skating, and circus school in the Seaplex, the Ovation of the Seas is a ship for couples and families alike!

Travel based on Cruise Departure 30 September 2022

Prices are per person twin share in AUD, and subject to availability and currency fluctuations.
Pricing is subject to change until reservation is confirmed. Accommodation is subject to change and availability.
Surcharges may apply. Flights may not be direct or operate daily. Itinerary and inclusions are subject to change.
Disruptions to cruising and itinerary may occur. ^Flexible Booking Conditions:  At any time prior to the due date of your second deposit, you have the option to: 1. Change your departure dates OR 2. Cancel your booking, in which case My Cruises will hold all funds paid in the form of a credit; which can used for a future booking with My Cruises.  Changes made after the second deposit payment are subject to standard cancellation terms & conditions. Departure date changes are subject to availability & blackout dates. No refund will be given if you are not able to change your departure date as a result of alternate dates not being available. Your My Cruises Specialist will provide further details at time of booking.  Shore excursions and other items such as alcoholic beverages & laundry are an additional cost. Should gratuities or hotel service charges not already be included in your package, these are mandatory and charged by the cruise line to your onboard account on a day by day basis.
Itineraries are subject to change at any time without notice.
Please note – onboard benefits valued at has been converted into Australian Dollars from the onboard currency. Details of the onboard currency can be provided by your consultant at the time of enquiry.
Due to security reasons, all guests must be on board 2 hours before sailing.
Disembarkation usually begins 2 hours after docking.
These fares/prices may change due to availability or currency fluctuations.
Please note upgrade amounts advertised may be based on lead in obstructed view staterooms.
Please note that a majority of US based (including Hawaii) hotels impose a daily mandatory additional charge that is automatically added to your bill by the hotel. There are various inclusions provided for these resort fees. These fees are separate from, cannot be prepaid prior to arrival and are in addition to our advertised package.
Please note many European hotels charge a nominal daily City Tourist Tax which is utilised locally for tourism-related purposes and to improve the local infrastructure in the area. This tax is collected by the hotels directly from the customer and the amount can vary by region, hotel size or type. Local regulations state this must be collected by the hotel and cannot be prepaid.
All passports, vaccinations and visas are the responsibility of the travelling guest to secure prior to departure from Australia

Explore some of America’s most inconic cities with your included city stays
Be mesmerised by the sheer size and beauty of the Grand Canyon
Cruise Port Highlights; enjoy an overnight stay onboard in Maui
Cruise onboard the awe inspiring Ovation of the Seas; try the Bionic Bar & the Flowrider 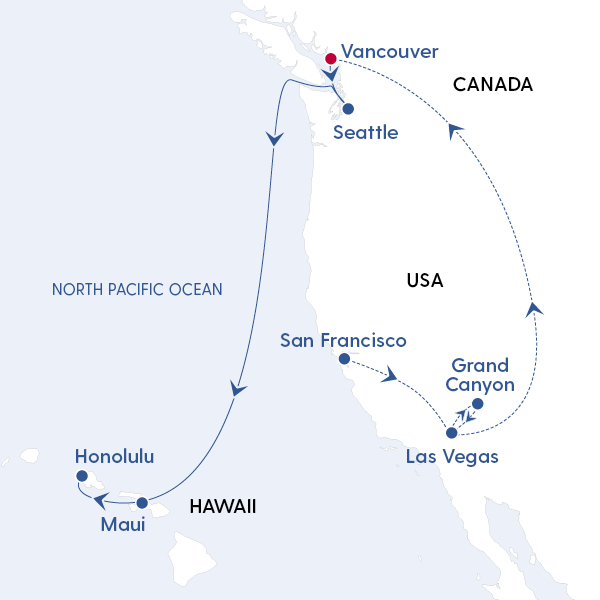