Welcome to Australia Top End Capital City – Darwin. One of Australia’s far north’s true underestimated beauties. On arrival at Darwin Airport, make your own way to your hotel for your two night Darwin, Top End experience.

Known for its food and festival culture there seems to always be something to do or see. Explore tropical parklands or opt for a safer way to see the native wildlife at the city’s Crocosaurus Cove!

Established in 1986, Litchfield National Park is a stunning location. You can take in the splendour of thundering waterfalls, rainforest pockets and historic sacred sites. It is a haven for hundreds of native bird species and the plateau supports a rich range of woodland flora. The traditional custodians of the Park are the Wagait people, many of whom still call the area home.

Morning at leisure. After checking out of your hotel, make your own way to the Darwin cruise terminal for your 10-night luxury Iconic Kimberley Coast cruise.

Enjoy a leisurely day at sea to take advantage of the luxurious onboard services or enjoy a cool drink by the pool. Enjoy time to reflect on your experiences or share photographs with fellow guests. Your expedition team will be offering an enrichment program focusing on Australia, its history and flora and fauna. Perhaps take the opportunity to be out on deck sunbathing or sampling culinary specialities prepared by our Chef and Galley Team.

The Indonesian officials will perform the necessary clearance formalities. Our stopover at Pulau Meatimiarang is for technical clearance purposes only. There is no opportunity for guests to go ashore.

Wyndham is the northernmost town in Western Australia and in many ways is the gateway to the Kimberley. It is surrounded by some of the most spectacular landforms, rivers and wetlands in the Kimberley.

The journey up the King George River is nothing short of breathtaking. The 80-metre-high sides of the gorge display varying degrees of weathering of the ancient Warton sandstone. The colours and textures of the gorge change with the light as you travel further up the river creating a continual changing scenery that is simply stunning. The journey culminates at the King George twin falls; the highest single-drop falls in the whole of the Kimberley (80 m or 260 ft). Fed by wet season run-off the level of water cascading over the falls varies from year to year. Your Expedition Team will escort you in either the Zodiacs® or ships tenders to the foot of the twin falls and explain all about the stunning geological formations of the canyon.

Jar Island contains ancient rock art galleries depicting the Gwion Gwion style unique to the Kimberley region. Mainly neglected by, or unknown to, the early European researchers of Aboriginal culture in the Kimberley in favour of the dominant and more dramatic Wandjina art, Gwion Gwion art has in recent years gained world prominence. It is generally thought that this art may extend back to over 30,000 years before our time and represents the first wave of seagoing colonisers of the Australian continent. As it is, these are the oldest detailed depiction of human figures in the world. Join your Expedition Team ashore for a short walk, past some fascinating rock formations, to the site of the Gwion Gwion art galleries.

The Bonaparte Archipelago is a stunningly rugged maze of islands stretching almost 150 km along Western Australia’s remote Kimberley coast. Its colour and scale conspire to take ones’ breath away. Its distant location has meant it has remained an unspoilt and remarkably pristine location to explore and experience. Phillip Parker King named “Swift’s bay” after Jonathon Swift (1667-1745) the author of Gulliver’s travels. The ‘T’ shaped bay is composed of heavily fractured sandstone providing an abundance of rock shelters. On the walls of these shelters are examples of both Wandjina and Gwion Gwion style rock art. Join your expedition team ashore for a guided walk to a number of rock art galleries depicting these unique rock art styles.

Arguably one of the most scenic parts of the Kimberley coast, Prince Frederick Harbour and the Hunter River are lined with ancient rainforest pockets, pristine mangroves and mosaic sandstone cliffs. They are considered to be some of the most pristine mangrove forests in the world, containing up to 18 different species, supporting a rich and diverse fauna. The sandstone escarpment at the river mouth, known as “Kampamantiya” rises over 200 metres high before giving way to extensive mud banks and mangrove forests home to numerous bird species and the iconic saltwater crocodile. Our expert Expedition Team will share their knowledge with you as you explore this pristine mangrove environment by Zodiac® keeping a constant lookout for wildlife. You will also have the opportunity to reach Mitchell Falls by helicopter from Naturalist Island beach.

Lying to the east of the Buccaneer archipelago, the ancient landscapes of Collier Bay have been shaped by the massive tidal movements the region is renowned for, creating a photographer’s paradise. With a tidal range exceeding 14 metres, recorded near the Yule entrance at the southern end of the bay, they are among the largest in the world. This massive daily movement of water creates unique phenomena that occur nowhere else in the world. Nestled in the centre of the Bay is Montgomery Reef, the world’s largest inshore reef system. As the tide falls a raging torrent of water cascades off the top of the reef, creating turbulent ‘rivers’ and mini waterfalls. At the southern end of the Bay, Talbot Bay is home to the world’s only ’Horizontal Falls’ described by Sir David Attenborough as “One of the greatest wonders of the natural world.” Hidden in the many caves and grottos of this ancient landscape is a multitude of ancient Rock Art galleries. Here you can find spectacular examples of the Wandjina and Gwion Gwion styles.

As we are at the mercy of weather and tide conditions in this region, the activities mentioned above are only possible experiences and can’t be guaranteed.

The Lacepede Islands are a protected class-A nature reserve and are significant as a seabird nesting rookery for brown boobies and roseate terns. Other species often sighted at the Lacepedes include Australian Pelicans, frigate birds, egrets and gulls. The four low-lying islands are also an important breeding and nesting habitat for green turtles. If weather and tide conditions are suitable, we will explore the lagoons by Xplorer and Zodiac tender vessels. As our incredible Kimberley adventures draw to a close, on our last evening aboard we enjoy the Captain’s farewell drinks amongst newfound friends.

Disembarkation commences from 07:00hrs, once you have collected your luggage you will be transferred to your hotel for your two-night stay to explore Broome.

Explore Broome at your own leisure this morning. Sights include the fascinating Chinatown district, which is the historic city centre, and the famous Japanese Cemetery, dating back to 1896 and has a past marked by the immigration of numerous Chinese and Japanese workers, attracted by the prosperous pearl industry at the end of the 19th century and at the beginning of the 20th century. Broome is also famous for the “Staircase to the Moon”, an optical illusion created by the Moon reflecting on the sandbanks at low tides, like a staircase climbing up towards the sky, a unique spectacle provided by nature.
This afternoon you will enjoy a sunset camel ride on the iconic Cable Beach.

On check out from your hotel, we say goodbye to Australia’s Kimberley region. Make your own way to the Broome Airport for your flight home or onward journey.

An elegant appearance and refined interior design combine with cutting-edge technology to offer a new type of cruising: adventure in a luxury setting. 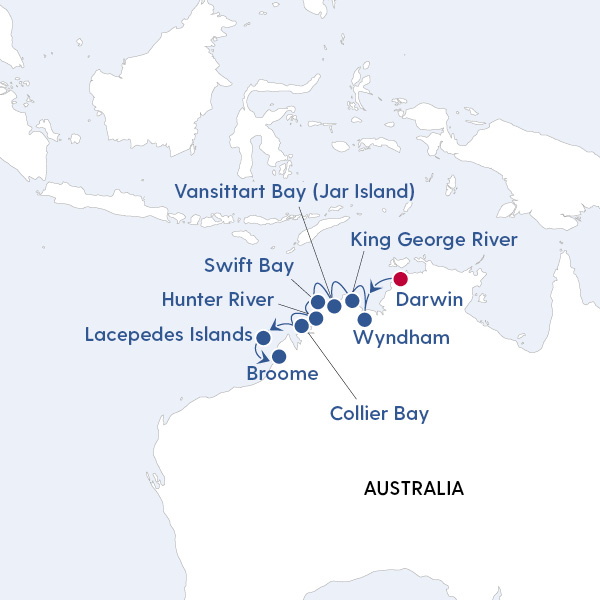