Paris, London & the Beauty of Norway

Located along the Seine River, Paris is a collection of villages and the sprawl of cobbled lands. Iconic architecture reaches into the sky from the wrought-iron structure of the Eiffel Tower to the medieval times of the Notre Dame cathedral. Galleries, bistros, and boutiques all line the boulevards of Paris. The city of romance is alive and awaits you to explore its treasures.

Eurostar transfers from Paris to London. Enjoy an overnight hotel stay to explore one of the oldest of the world’s great cities – its history spanning nearly two millennia – and one of the most cosmopolitan and most visited cities. Immersed in history, London’s rich seams of eye-opening antiquity are everywhere. The city’s buildings are striking milestones in a unique and beguiling biography, and a great many of them – the Tower of London, Westminster Abbey, Big Ben – are instantly recognisable landmarks. London has something for everyone: from history and culture to fine food and good times.

Explore over 5,000 years of British history in one day. Discover the royal castle of Windsor, the mysterious standing stone circle of Stonehenge, and the historic university city of Oxford on a full-day tour from London.

Portsmouth is a port city and naval base on England’s south coast, mostly spread across Portsea Island. It’s known for its maritime heritage and Portsmouth Historic Dockyard. The dockyard is home to the interactive National Museum of the Royal Navy, the wooden warship HMS Victory, where Nelson died in the Battle of Trafalgar, and HMS Warrior 1860. The Tudor ship Mary Rose is also conserved in a dockyard museum. Today you set sail on your 9 Night Luxury Northern Europe Cruise from London onboard Oceania Sirena.

Germanys second largest city & has been named the most livable city in Germany. Filled with History & culture Hamburg a destination not to be missed. Filled with world-class street art & museums, there is something for everyone in Hamburg. You will see the iconic Elbphilharmonie.

Kiel’s series charmless indoor malls linked by pedestrian bridges is a beautiful feature of this German city once obliterated during WWII by bombing raids. Follow Kiel’s main thoroughfare, the pedestrianised Holstenstrasse, to the Schlossgarten to reach the waterfront, marvel here at new warships being built for nations worldwide, and all manner of ships big and small.

Gothenburg, a major city in Sweden, is situated off the Göta älv river on the country’s west coast. An important seaport, it’s known for its Dutch-style canals and leafy boulevards like the Avenyn, the city’s main thoroughfare, lined with many cafes and shops. Liseberg is a popular amusement park with themed rides, performance venues and a landscaped sculpture garden.

The charming big town of Kristiansand, is in the South of Norway. A quaint town beach and flashy marina provide a cornerstone for this town’s charm. During your time in Kristiansand, explore the Christianshom Fortress; a watch tower used between 1662 and 1672 to keep watch over the strategic Skagerrak Straits

Disembark in Portsmouth and bid farewell to your newfound friends as your depart for your flight home or ask us about our flexible flights & extend your stay.

Sirena is the sister ship to Nautica, Insignia & Regatta as well as being the newest addition to the fleet. She is special in her own way with two new culinary delights, the first being a mouth-watering Italian experience at Tuscan Steak. Enjoy Italian cuisine, beautiful steaks & a fresh array of seafood. The grand dining room transforms into Jacques Bistro during lunch which serves up French perfection. Meanwhile, the finest Asian cuisine can be found at Red Ginger!

Sirena’s Suites were transformed to embody modern-day elegance in the finest form. The Owner’s & Vista Suites are crafted with custom-made furnishings, adorned with luxurious fabrics, stone, tile & walnut finishes. All rooms on board now come standard with the all-new custom-designed Ultra Tranquility Bed.

Travel based on Cruise Departure 1 October 2022

Prices are per person twin share in AUD, and subject to availability and currency fluctuations.
Pricing is subject to change until the reservation is confirmed. Accommodation is subject to change and availability.
Surcharges may apply. Flights are based on economy class unless otherwise stated, may not be direct or operate daily. Itinerary and inclusions are subject to change.
Disruptions to cruising and itinerary may occur.
*Flexible Booking Conditions: At any time prior to the due date of your second deposit, you have the option to
1. Change your departure dates OR
2. Cancel your booking, in which case My Cruises will hold all funds paid in the form of credit; which can be used for a future booking with My Cruises.
Changes made after the second deposit payment are subject to standard cancellation terms & conditions. Departure date changes are subject to availability & blackout dates. No refund will be given if you are not able to change your departure date as a result of alternate dates not being available.
Your My Cruises Specialist will provide further details at the time of booking.
Shore excursions and other items such as alcoholic beverages & laundry are an additional cost. Should gratuities or hotel service charges not already be included in your package, these are mandatory and charged by the cruise line to your onboard account on a day-by-day basis.
Itineraries are subject to change at any time without notice.
Please note – onboard benefits valued have been converted into Australian Dollars from the onboard currency. Details of the onboard currency can be provided by your consultant at the time of enquiry.
Due to security reasons, all guests must be on board 2 hours before sailing.
Disembarkation usually begins 2 hours after docking.
These fares/prices may change due to the availability or currency fluctuations.
Please note upgrade amounts advertised may be based on lead in obstructed view staterooms.
Please note that a majority of US-based (including Hawaii) hotels impose a daily mandatory additional charge that is automatically added to your bill by the hotel. There are various inclusions provided for these resort fees. These fees are separate from, cannot be prepaid prior to arrival, and are in addition to our advertised package.
Please note many European hotels charge a nominal daily City Tourist Tax which is utilised locally for tourism-related purposes and to improve the local infrastructure in the area. This tax is collected by the hotels directly from the customer and the amount can vary by region, hotel size, or type. Local regulations state this must be collected by the hotel and cannot be prepaid.
All passports, vaccinations, and visas are the responsibility of the travelling guest to secure prior to departure from Australia.
Please check Visa requirements for all countries visited on this itinerary.
China, Russia, India, Canada, and the USA require visas to be arranged prior to sailing for all Australian passport holders.
For Non-Australian passport holders please check with the appropriate embassy.
** Low Deposit Policy
A second deposit (part payment) will be required/date & amount will be supplied by the consultant at the time of booking. 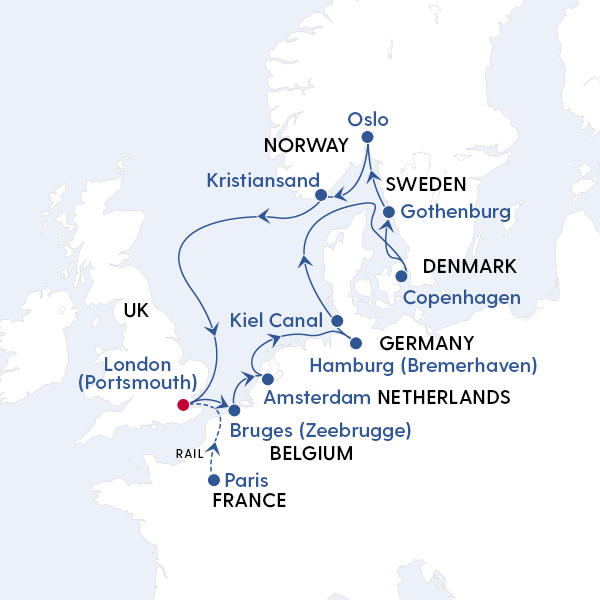