Welcome to Athens, the historical capital of Europe. Welcome to the birthplace of democracy, arts, science, and philosophy of western civilisation. Home of Plato, Socrates, Pericles, Euripides, Sophocles, Aeschylus. Athens is one of the world’s oldest cities. Its recorded history spanning around 3.400 years and it is being inhabited since the 11th millennium B.C. E. Today, under the shadow of the Parthenon, the contemporary urban scenery of the sprawling city reflects its exciting history, its multi-cultural modern personality as well as the infrastructure and facilities. Enjoy a 2-night stay to explore the city of Athens

Kusadasi, Turkey
Ephesus was an ancient Greek city on the coast of Iona in Turkey. It is said that this city of Ephesus was created by Androclosthe son of the king of Athens. Take a trip to see the 10th-century ruins there including the Temple of Artemis a shrine of the goddess Artemis. Ephesus is also said to be home to the House of Virgin Mary, as well as the St John Basilica. Depart Kusadasi and sail onto Patmos.

Patmos, Greece
The small island of Patmos is the birthplace of Christianity. The last book of the New Testament was allegedly written in the city, visit the Monastery of Saint John the Theologian which towers over the city. The seafood here is incredibly fresh and the cheese pie is a must!

Jerusalem is located in the Middle East, perched on a plateau in the Judaean Mountains. This holy city finds itself between the Mediterranean and the Dead Sea and is recognised as one of the oldest cities in existence. Steeped in religious content, it is considered holy to Judaism, Christianity, and Islam. Fun Fact – the old city walls were built back in 1541!

Haifa, a large port located in northern Israel, is the perfect setting off point for excursions. For example, a tour of places described in the Bible. After visiting places such as Bethlehem, Nazareth, Cana, and Jerusalem. if you are more interested in history and are not afraid to get a little tired, an excursion to Massada will take you to the top of the mountain where the Jews took their last stand against the Romans. A short distance from Massada sits a landlocked lake that is so salty that it has been nicknamed the Dead Sea. You will be able to reach the bubbling city of Tel Aviv, it is considered, for good reason, the most modern city in Israel.

Limassol – or Lemoses – is the second-largest urban area in Cyprus, this is a bustling and vibrant city with plenty to offer. The compact centre snakes around an old castle and is packed with boutiques, restaurants, and bars.

Santorini is one of the most formidable islands in the world, famed for beautiful food, pristine water, and unrivaled sunsets, in the foreground are the postcard whitewashed buildings. Perceptions are had about the lost city of Atlantis being located here due to Santorini’s subtle mystery.

Enjoy one final day in Athens during your port call today. Visit anything you missed during your your 2 night stay on enjoy one of the shore excursions on offer.

Rhodes is positioned off the coast of Turkey and blends history and beauty into one. You are guaranteed to be in awe of the Grand Masters Palace and the old fortified city provides a great walk back in time.

Bodrum is a city on the Bodrum Peninsula, stretching from Turkey’s southwest coast into the Aegean Sea. The city features twin bays with views of Bodrum Castle. This medieval fortress was built partly with stones from the Mausoleum at Halicarnassus, one of the Seven Wonders of the Ancient World, completed in the 4th century B.C. The city is also a gateway for nearby beach towns and resorts.

Known for its beaches and traditional villages, enjoy your time in Paros, Greece. Paros has long been a Greek star; white marble drawn from the island’s interior made the island prosperous from the Early Cycladic period onwards. Most famously, the Venus de Milo was carved from Parian marble, as was Napoleon’s tomb. Boasting a beautiful natural landscape and 120 km of coastline, it has endless blonde-sand beaches, verdant mountains, and cliff-top villages galore.

Wander the atmospheric old alleys, marvel at the massive Venetian walls, and explore The Palace of Knossós in this beautiful port city Heraklion – the capital of the Greek island of Crete.

Santorini is one of the most formidable islands in the world, famed for beautiful food, pristine water, and unrivaled sunsets, in the foreground are the postcard whitewashed buildings. Perceptions are had about the lost city of Atlantis being located here due to Santorini’s subtle mystery.

Farewell Athens today for your flight home or ask us about our flexible flights & extend your stay.

Board the Norwegian Jade to experience Norwegian Cruise Line’s award-winning hospitality. Refurbished in 2017, this well-equipped ship is perfect for the whole family. Challenge the kids to a game of basketball or volleyball; browse original, well-known works at the art gallery; or kick back and relax with a spa treatment at the Mandara Spa before heading to the pool. Time out can be spent at Magnum’s Champagne and Wine Bar, Malting’s Whiskey Bar, or any of the 11 lounges onboard. There’s so much to feast your eyes upon onboard the Norwegian Jade and, with 15 dining options available, your stomach won’t get overlooked either!

Travel based on Cruise Departure 14 May 2023

Unearth history as you explore enchanting Athens with your included city stay
Feel the glow of a Greek Island Sunset as your visit Santorini & Mykonos
Port Call Highlight; Stop in at Kusadasi, home of the Ancient City of Ephesus
Ask us about our flexible flights & extend your stay to explore more of Europe 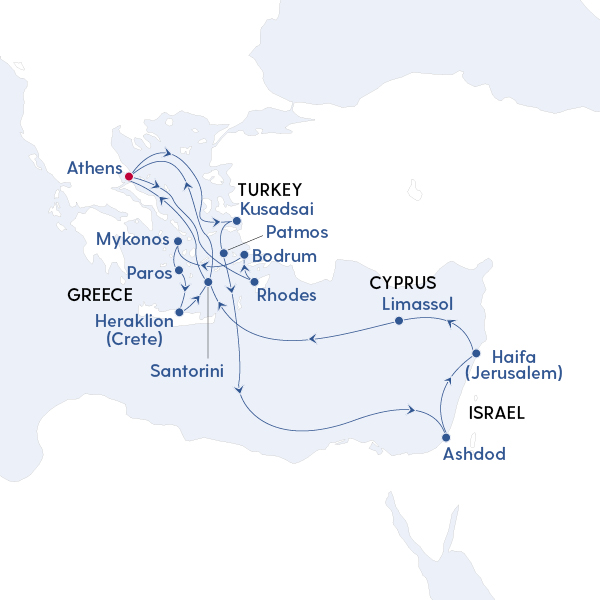