Your Norwegian Cruise
18 Night Cruise from Southampton to Copenhagen Onboard Norwegian Getaway in an Interior Stateroom
Onboard Dining Across A Range Of Complimentary Venues
Onboard Entertainment including Live Music & Performances
Bonus Onboard Beverage Package with Cocktails, Spirits, Wine, Beer & Soft Drinks
Bonus Onboard Specialty Dining Package
Bonus Onboard Wifi Package
Bonus Shore Excursion Credit
Bonus Onboard Prepaid Gratuities (valued at $734)
Bonus Choice of Cabin Location
Enjoy an overnight stay onboard in St Petersburg
Bonus $400 Onboard Credit

Welcome to the global centre of art, fashion, gastronomy, and culture. Paris boasts 19th-century architecture, intertwined with tree-lined boulevards and the River Seine. It is home to some of the most formidable structures in the world including the Eiffel Tower, Notre-Dame Cathedral, and the Louvre. Explore over your 2 night stay.

Scenic Rail Journey Paris to London.
Welcome to London! One of the oldest of the world’s great cities – its history spanning nearly two millennia – and one of the most cosmopolitan and most visited cities. Immersed in history, London’s rich seams of eye-opening antiquity are everywhere. The city’s buildings are striking milestones in a unique and beguiling biography, and a great many of them – the Tower of London, Westminster Abbey, Big Ben – are instantly recognisable landmarks. London has something for everyone: from history and culture to fine food and good times.

Day at leisure to explore London.

Embark your cruise today in the bustling port of Southampton, the UK’s number one cruise port. Situated only 130 miles from London with easy access via, train, car, or coach. It’s home to the SeaCity Museum, with an interactive model of the Titanic, which departed from Southampton in 1912. Nearby, Southampton City Art Gallery specialises in modern British art. Solent Sky Museum features vintage aircraft like the iconic Spitfire. Tudor House and Garden display artifacts covering over 800 years of history, including a penny-farthing bike.

Amsterdam has been constructed entirely on stakes to sit above the cities water level. The Anne Frank House, The Hague, and a Delft Blue Pottery Factory are merely a few of the sights that await your arrival in this beautifully eclectic city.

Your day at sea will allow you to take full advantage of everything the ship has to offer. Seek out hidden treasures and make the most of the facilities onboard. All of the ship’s activities can be found on the vessel’s daily newsletter. If relaxation is on your mind then your sea day will allow you to sit back, soak in ship life and watch the world as it floats by you.

Aarhus is a hub for history from the famous Den Gamle By to the underground Viking Museum. Den Gamle By is the national open-air museum of Danish history & culture. There is also the underground Viking Mesum built on Viking town of Aros some 1200 years ago, recently refurbished there is a range of artifacts which haven’t been seen for 100s of years!

Warnemünde will surprise you with its villas, hotels, and the large white and silver beach. Its heart is Am Strom, next to the port, where the homes of old captains and fishermen have been turned into coffee shops and boutiques to explore.

Kiel’s series of charmless indoor malls linked by pedestrian bridges is a beautiful feature of this German city once obliterated during WWII by bombing raids. Follow Kiel’s main thoroughfare, the pedestrianised Holstenstrasse, to the Schlossgarten to reach the waterfront, marvel here at new warships being built for nations worldwide, and all manner of ships big and small.

Welcome to the capital of Denmark! Disembark your cruise this morning & explore this beautiful city filled with canals and cobblestone streets. Spend your day shopping, brush up on your history at the museums and sip on local coffee at one of the many cafes.

Warnemunde is perfectly situated for easy access to Germany’s capital Berlin. This vibrant city is rich with history and famous landmarks including the Brandenburg Gate, Checkpoint Charlie & the Reichstag. You can take a walk along the East Side Gallery, once a section of the Berlin wall, now filled with colourful street art which has transformed the city.

Awake for breakfast onboard, before docking in Helsinki. Then tour the Finnish capital, seeing major sights including Rock Church, Senate Square surrounded by the Lutheran Cathedral of Helsinki, the Senate, University and Library of Helsinki, the Sibelius monument, Olympic stadium, and new Opera House.

Today’s city tour of Stockholm starts at Fjällgatan for magnificent views of the Swedish capital – spread out on 14 islands with Lake Mälar on one side and the Baltic Sea on the other. See the Old Town ‘Gamla Stan’ with its fascinating narrow cobble-stoned alleys, Royal Palace, Cathedral and City Hall where the annual Nobel Prize award takes place. The tour extends to the recreational island Djurgården, where many of Stockholm’s finest museums are found. Spend the rest of your last day in Scandinavia exploring at your own pace.

Day 23: Copenhagen, Denmark
Disembark your cruise this morning and farewell Copenhagen as you fly home or ask us about our flexible flights and extend your stay.

Built-in 2014 the Norwegian Getaway can accommodate 3,963 passengers. She sails out of Miami to the warm waters of the Caribbean, beautiful Europe & outstanding Transatlantic cruises. Godmothers to the Norwegian Getaway are the American Football Miami Dolphins Cheerleaders. The Norwegian Getaway features the Waterfront, NCL’s innovative open-air promenade lined with bars and restaurants, offering uninterrupted views of the ocean. She has recently undergone the Norwegian Edge elevation which includes a full-service Starbucks, rock n roll themed Syd Norman’s Pour House, and more than 800 pieces of new artwork. The upgraded social spaces and reinvigorated accommodations make this already beautiful ship, stunning.

Upgrade to Balcony Stateroom from only $1299 per person

Explore the the romantic history of Paris & London
Enjoy an overnight stay onboard in St Petersburg
Marvel at the stunning architecture as you visit Aarhus, Denmark
Ask us about flexible flights and extend your stay

Travel based on Cruise Departure 29 April 2023

Bonus $400 Onboard Credit is based on $200 per stateroom per sailing, this package is based on a back to back sailing combination.
Prices are per person twin share in AUD, and subject to availability and currency fluctuations.
Pricing is subject to change until the reservation is confirmed. Accommodation is subject to change and availability.
Surcharges may apply. Flights may not be direct or operate daily. Itinerary and inclusions are subject to change.
Disruptions to cruising and itinerary may occur. ^Flexible Booking Conditions:  At any time prior to the due date of your second deposit, you have the option to: 1. Change your departure dates OR 2. Cancel your booking, in which case My Cruises will hold all funds paid in the form of a credit; which can be used for a future booking with My Cruises.  Changes made after the second deposit payment are subject to standard cancellation terms & conditions. Departure date changes are subject to availability & blackout dates. No refund will be given if you are not able to change your departure date as a result of alternate dates not being available. Your My Cruises Specialist will provide further details at the time of booking.  Shore excursions and other items such as alcoholic beverages & laundry are an additional cost. Should gratuities or hotel service charges not already be included in your package, these are mandatory and charged by the cruise line to your onboard account on a day-by-day basis.
Itineraries are subject to change at any time without notice.
Please note – onboard benefits valued at has been converted into Australian Dollars from the onboard currency. Details of the onboard currency can be provided by your consultant at the time of inquiry.
Due to security reasons, all guests must be on board 2 hours before sailing.
Disembarkation usually begins 2 hours after docking.
These fares/prices may change due to the availability or currency fluctuations.
Please note upgrade amounts advertised may be based on lead in obstructed view staterooms.
Please note that a majority of US-based (including Hawaii) hotels impose a daily mandatory additional charge that is automatically added to your bill by the hotel. There are various inclusions provided for these resort fees. These fees are separate from, cannot be prepaid prior to arrival, and are in addition to our advertised package.
Please note many European hotels charge a nominal daily City Tourist Tax which is utilised locally for tourism-related purposes and to improve the local infrastructure in the area. This tax is collected by the hotels directly from the customer and the amount can vary by region, hotel size or type. Local regulations state this must be collected by the hotel and cannot be prepaid.
All passports, vaccinations and visas are the responsibility of the travelling guest to secure prior to departure from Australia. 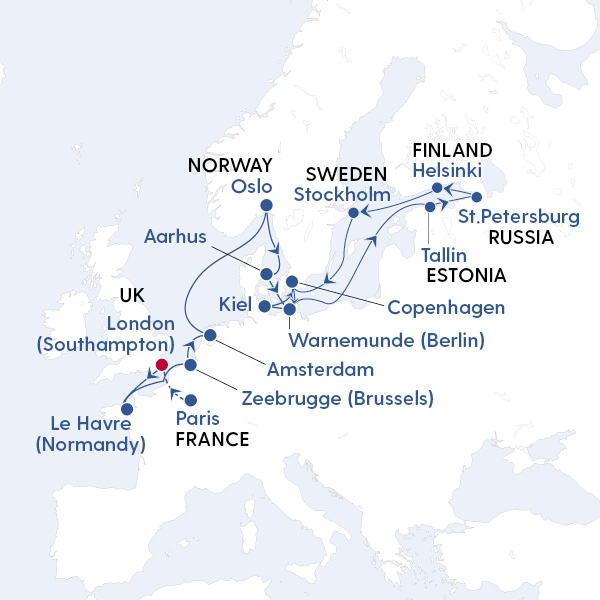