Your 14 Night Norwegian Cruise
14 Night Cruise from New York to London Onboard Norwegian Dawn in an Interior Stateroom
Onboard Dining Across A Range Of Complimentary Venues
Onboard Entertainment including Live Music & Performances
Onboard All Port Taxes & Charges
Bonus Onboard Beverage Package with Cocktails, Spirits, Wine, Beer & Soft Drinks
Bonus Onboard Specialty Dining Package
Bonus Onboard Wifi Package
Bonus Shore Excursion
Bonus Onboard Prepaid Gratuities (valued at $570)

Explore the beautiful concrete jungle that is New York City. Spend your day visiting the prosperity bull on Wall Street, seek out panoramic views from the Empire State Building, and gaze upon the city from the architecturally pleasing Brooklyn Bridge. You’re also spoilt for choice with the Guggenheim and the Met.

Embark your cruise today and sail out of this iconic city.

Saint Pierre is undoubtedly one of Martinique’s loveliest towns is the last piece of French territory in North America, tucked between a mountainside covered in steamy rainforest and a tranquil azure bay. Replete with disheveled charm, it’s full of colonial-era buildings and boasts an attractive dark-gray sand beach and the perfect location for superb sunsets.

St. John’s, the capital city of Newfoundland island. Downtown is known for its colourful row houses. Above the city is Signal Hill with walking trails and the site of the first transatlantic wireless communication, Cabot Tower, which commemorates John Cabot’s discovery of Newfoundland.

Iceland’s capital and largest city was settled in 877 AD and has grown into an integral seaport and government hub. Even though it is a considerably advanced and progressive destination, it still uses water from nearby geysers to heat all of its buildings.

Explore Belfast’s cultural quarters—the Cathedral Quarter, the Gaeltacht Quarter, the Queen’s Quarter and the Titanic Quarter—the former linen and shipbuilding epicentre. Here, where the Titanic was so carefully built, you can see beautifully restored Victorian architecture. Enjoy the true Irish experience at the lively waterfront, which is a friendly hub of live music, overflowing pubs and modern art.

Dublin is thought to be almost a thousand years old, but the city has transitioned seamlessly into the 21st century. Must-do’s include Trinity College, St. Stephen’s Green Park, Newgrange, Dublin Castle, the National Museum of Ireland and the James Joyce Cultural Centre. No visit to Dublin would be complete without a pint of Guinness on a relaxing afternoon.

Disembark your cruise in the busting port of Southampton today and head to London for your 3 night stay.

Explore one of the oldest of the world’s great cities – its history spanning nearly two millennia – and one of the most cosmopolitan and most visited cities. Immersed in history, London’s rich seams of eye-opening antiquity are everywhere. The city’s buildings are striking milestones in a unique and beguiling biography, and a great many of them – the Tower of London, Westminster Abbey, Big Ben – are instantly recognisable landmarks. London has something for everyone: from history and culture to fine food and good times.

Travel based on Cruise Departure 20 April 2023

Discover the worlds most iconic cities in one amazing adventure from New York & Paris to Dublin & London
Sail the picturesque coast of Eastern Canada
Port call highlight; enjoy an overnight stay onboard in Iceland
Ask us about our flexible flights and extend your stay to see more of the USA or Europe 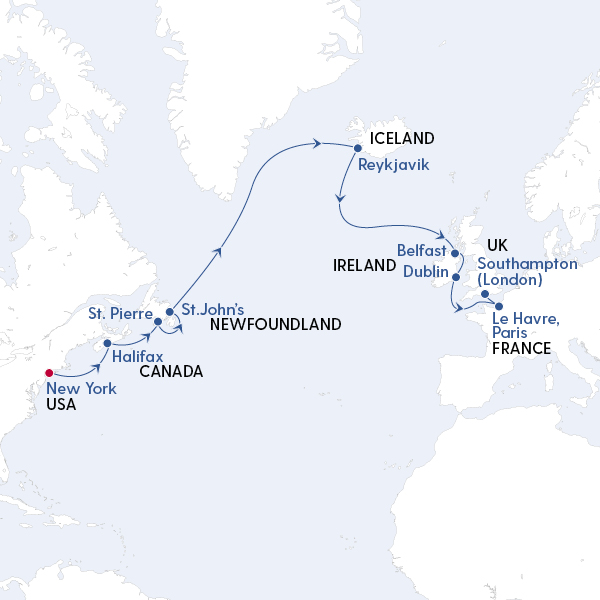