Welcome to the global centre of art, fashion, gastronomy and culture. Paris boasts 19th century architecture, intertwined with tree-lined boulevards and the River Seine. It is home to some of the most formidable structures in the world including the Eiffel Tower, Notre-Dame Cathedral and the Louvre.

On arrival make your way to your hotel for your 2 night stay to explore the city of Paris.

Welcome to the cultural hub of Spain, Barcelona! Explore the stunning sights such as the Sagrada Familia and enjoy the local tapas for some truly delicious cuisine. Day at leisure.

On check out from your hotel make your way to the Barcelona Cruise Port for your 16 night cruise onboard Norwegian Bliss to New York.

The city was founded 2100 years ago and is overflowing with history. Wander the cobblestone streets and alleyways that surround the Gothic cathedral as the focal point of Palma. The is a resort city and capital of the Spanish island of Mallorca (Majorca), in the western Mediterranean. The massive Santa María cathedral, a Gothic landmark begun in the 13th century, overlooks the Bay of Palma. The adjacent Almudaina is a Moorish-style Arab fortress converted to a royal residence. West of the city, hilltop Bellver Castle is a medieval fortress with a distinctive circular shape.

Cartagena traces its roots back to the peak period of the Roman Empire, a city of juxtaposition between modern buildings and ancient ruins.

Historic, mysterious and romantic, the Spanish city of Cadiz is unique. It is generally considered to be the oldest continuously inhabited settlement in Europe founded in around 1100 BC. An ancient port city in southwest Spain, almost completely surrounded by water, it contains enough history to enchant and intrigue you throughout your Cadiz cruise.

Funchal is sheltered by hills, and recognised for its harbour, gardens and Madeira wine cellars. The centuries-old Cathedral mixes Gothic and Roman styles, with the carved wooden ceiling as its pièce de résistance. Fronting the harbour is the São Tiago Fortress, built in the 1600s and now houses the Contemporary Art Museum, with a large collection of Portuguese inspired pieces.

As the heart of tourism of the Azores, Ponta Delgada offers much to see and do along with a mild climate and lush vegetation. Impressive churches and majestic white houses stand as a constant reminder of the city’s illustrious past. Explore more of Ponta Delgada on a European cruise!

Your days at sea will allow you to take full advantage of everything the ship has to offer. Seek out hidden treasures and make the most of the facilities onboard. All of the ships activities can be found on the vessels daily newsletter. If relaxation is on your mind then your sea day will allow you to sit back, soak in ship life and watch the world as it floats by you.

HMD Bermuda was the principal base of the Royal Navy in the Atlantic Ocean between American independence and the Cold War, it still stands as a island that allows an eery glance back in time.

Disembark the Norwegian Bliss for the last time and make your own way to your hotel for you to explore New York City. Explore the beautiful concrete jungle that is New York City. Spend your day visiting the prosperity bull on Wall Street, seek out panoramic views from the Empire State Building and gaze upon the city from the architecturally pleasing Brooklyn Bridge. You’re also spoilt for choice with the Guggenheim and the Met.

Norwegian Bliss, NCL’s newest & most incredible ship. That’s what you’ll experience when you holiday on NCL’s newest & most incredible ship, Norwegian Bliss. She holds over 4000 passengers while offering the service & feeling of being on a small ship. Custom-built for the spectacular, Norwegian Bliss features a revolutionary Observation Lounge for you to soak in every stunning moment, from bald eagles soaring over glaciers to whales breaching amongst icebergs. Experience the best dining, entertainment & amenities at sea, with the surrounds of unrivaled natural beauty. There’s simply one word to describe the experiences awaiting you on Norwegian’s newest ship: Bliss.

Travel based on Cruise Departure 5 May 2023

Explore like a local during your included city stays in Paris, Barcelona & New York
Port call highlights; Visit the Alhambra Palace in Granada
Walk the cozy streets & discover the unique architecture of the Azores
Ask us about flexible flights & extend your stay in Europe or USA 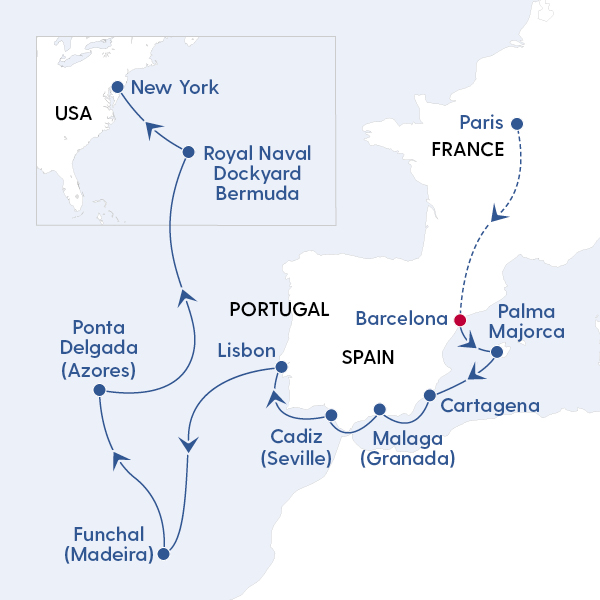