We welcome you in the capital city of India, for a journey across the fascinating history markers of medieval north India. Wars were fought and rulers changed in Delhi but ordinary lives were lived in relative continuity. Glimpses of these can be seen even today as the character of the city underwent massive changes in the last decades. In the lands fabled to have seen seven cities, signs of the old are continuously jostling with the new, presenting an ever-fascinating panorama. We welcome you to its chaos and stability, into its steadfastness and its impatience and into a delightful rainbow of amalgamation, producing a world completely its own.

This morning, proceed for a guided half day city tour, Old Delhi capital built by emperor Shajahan. Visit the historic Jama Masjid and drive past the Red Fort along with the narrow winding lanes best traversed by a cycle-rickshaw house some of the oldest inhabitants and also the oldest trading establishments of the city. Later drive past the Rashtrapati Bhavan (Presidential Palace) and the secretariat buildings, the impressive Rajpath and the World War I memorial arch, the India Gate. Later visit Delhi most beautiful monument the Humayun’s Tomb. On our way back contrast the swift architectural changes brought by the colonial rulers mirroring styles from across Europe and adapted to the Indian. Afternoon Free for optional activities

After breakfast drive to Agra, on arrival check in at hotel. Afternoon Free for optional activities

Early morning visit to the Taj Mahal at SUNRISE This stunning mausoleum immortalized the name of Shah Jahan’s last wife Mumtaz Mahal, “light of the palace”. Built by Indian artisans and artisans from neighboring Islamic countries, it is aptly described by the poet laureate Tagore as “A tear on the face of eternity”. Decorated with a mosaic of semi-precious stones and Persian calligraphy recreating verses from the Koran, the mausoleum is an important place of pilgrimage since the empress died in childbirth making her a martyr. Come back hotel for freshen up and after breakfast at the hotel visit the mighty Agra Fort. When the Mughal Emperor Akbar established his supremacy in Northern India, he began his first architectural venture, rebuilding the fort as a beautiful fort palace. The work was completed by his son and grandson, highlighting the Mughals’ ability to blend defensive and decorative architecture. Richly decorated with marble and mosaic, it was in a part of this fort that Shah Jahan spent the last years of his life, imprisoned by his son Aurangzeb. His private quarters, where he was confined, have a magical view of the Taj Mahal across the river Yamuna. Two great Mughal monarchs, Akbar and Shah Jahan, transformed the little village of Agra into a befitting second capital of the Mughal Empire - giving it the name Dar-Ul-Khilafat (seat of the Emperor). Today, a visitor to Agra is caught up in a world of contrasting edifices of red sandstone and white marble, narrow gullies and quaint buggies, and that irresistible charm that this favourite city of the Mughals still retains.

After breakfast commence the drive for Agra, visiting Fatehpur Sikri en-route. Located 40km after Agra, Fatehpur Sikri was built by Emperor Akbar in 1569 after it was prophesised that the then childless Akbar would have sons if he moved his capital to the site. At great expense to the empire, the capital was moved here but sadly only occupied for 14 years before slowly being deserted and ruined after Akbar left the city due to a scarcity of water. Whilst here you visit the remarkably well-preserved and graceful buildings within the Ghost City including the Jama Masjid, tomb of Salim Chisti, Panch Mahal Palace and other palaces that speak of the grandeur and splendour of the Mughal Empire at the height of its power. Drive continues and after lunch in Bharatpur (at own cost) our next stop is Abhaneri village, to see the Chand Baori Stepwell and marvel at this ancient construction. Over 1,000 years old, the visually outstanding Stepwell was originally dedicated to Harshat Mata, the 'Goddess of Joy and Happiness'. Continue to Jaipur, known as the 'Pink City' for the colour of the buildings in the old town. Some parts of the road are very rough so the journey takes most of the afternoon. Afternoon Fre for optional activities

Start with a visit to Amber Fort. Hill forts were always important to the Rajput rulers. Belonging to the Hindu “Kshatriya” or warrior class, they believed in the line from the sacred holy book, the Purana that “a fort is the strength of a king”. In the afternoon visit the sprawling City Palace, a superb marriage of the Rajput and Mughal styles of architecture. The seven storied Chandra Mahal (Moon Palace) is a sprawling complex with multiple courtyards, public buildings, astronomical observatory and zenana mahals (harems). Within the palace complex are several museums; including an interesting textile gallery exhibiting a fine selection of textiles and costumes from the royal collection. From the City Palace you enter the extraordinary “Jantar Mantar”, the astronomical observatory built by Raja Sawai Jai Singh II in 1827. Roughly translated the name means “The Formula of Instruments”. This is one of five observatories he built in northern India. The instruments resembling massive futuristic structures are actually highly sophisticated instruments which are accurate even today. Then drive though the busy streets for a photography stop at Hawa Mahal, the ornate pink façade an icon of the city. This five storied high “screen” composed of projected windows, balconies protected by fine latticed screens was destined to enable the ladies of the harem to observe the lively street scenes of the city from a position of privacy. Evening you come back to your hotel

After breakfast, depart Jaipur and drive to Delhi (approx. 6 hrs) and check in to your Hotel. Evening Free for optional activities

After breakfast, departure transfer to Delhi airport to board your International flight to Dubai. Tonight enjoy your BONUS 1 night pre cruise

Mumbai is the most populated city in the world, offerring a collection of sights and cultural activities. This historical city is home to the famous Bollywood spectacle and is one of very few Indian cities to have a national park within its boundaries. A city tour is a must to ensure you see and do the most on your day here.

Stroll through sacred sites including temples and churches in this Portugese and Hindu influenced civilisation. Goa presents a stunning array of local spices, bustling markets, delicious food and beautiful beaches.

Mangalore is a significant port located on the Arabian Sea. The city boasts a rich history with regions dating back to major epics, forming the basis of the Hindu mythological pantheon. Home to 11th century temples, pristine beaches, historical museums and lighthouses; this city is filled with sacred sites, ready to be explored.

Cochin is home to one of the most divine harbours in the world, made up of Fort Kochi beach, St. Francis Church and encircled by the Chinese fishing nets.

Colombo is a terrific example of where old meets new in the countries capital. Stroll past colonial architecture and lush gardens in the Fort district, shop traditional marketplaces, step into modern times at Colombo’s countless restaurants, museums and galleries.

Phuket boasts some of the worlds most stunning coastlines, reef structures, sandy beaches and 5 star resorts. Venture in to the capital to view the juxtaposition of historic structures being absorbed by new shops, restaurants and cafes.

Welcome to Langkawi where you’ll be greeted by crystal blue waters and flawless beaches. Taste the local cuisine, explore an abundance of caves and waterfalls or delve underwater to bask in the marine life.

Penang is the northern gateway to Malaysia and is home to the countries oldest British settlement. Georgetown is a must visit, boasting the largest collection of pre-war residences in Southeast Asia and continues to maintain the quintessential heritage thanks to the protection of Penang Heritage Trust.

Explore the capital of Malaysia with it’s futuristic skyline dominated by the Petronas Twin Towers. Look out over the city from the observation deck and indulge in some local street food for a change of pace or maybe some fine dining and shopping.

Explore thousands of years of fascinating history and culture from aboard the luxurious Norwegian Spirit. Newly refurbished in 2017 she boasts two swimming pools with accompanying spas and sun loungers, with plenty of room to relax enjoy the warm Mediterranean sun between ports. With a great range of complimentary dining options available you will be spoilt for choice! Try out the German Bier Garten, the French Bistro, or enjoy the 24-hour room service on your balcony.

When you are not out exploring the fantastic destinations you can play a game of Blackjack at the Casino, get a spa treatment, or take in a show at the on-board theatre. 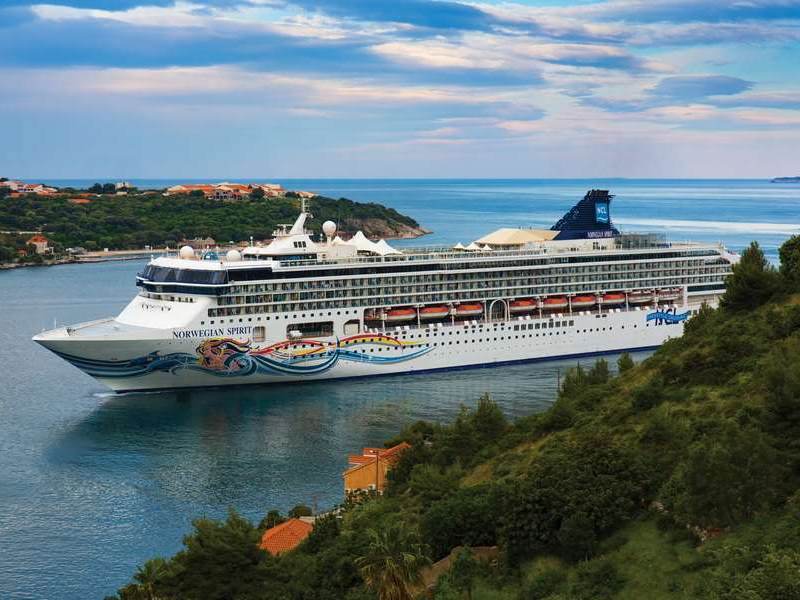 Travel based on Cruise Departure 22 November 2021

Disruptions to cruising and itinerary may occur. Shore excursions and other items such as alcoholic beverages & laundry are an additional cost.

Should gratuities or hotel service charges not already be included in your package, these are mandatory and charged by the cruise line to your onboard account on a day by day basis.
Itineraries are subject to change at any time without notice.

Please note many European hotels charge a nominal daily City Tourist Tax which is utilised locally for tourism-related purposes and to improve the local infrastructure in the area. This tax is collected by the hotels directly from the customer and the amount can vary by region, hotel size or type. Local regulations state this must be collected by the hotel and cannot be prepaid.

All passports, vaccinations and visas are the responsibility of the travelling guest to secure prior to departure from Australia. 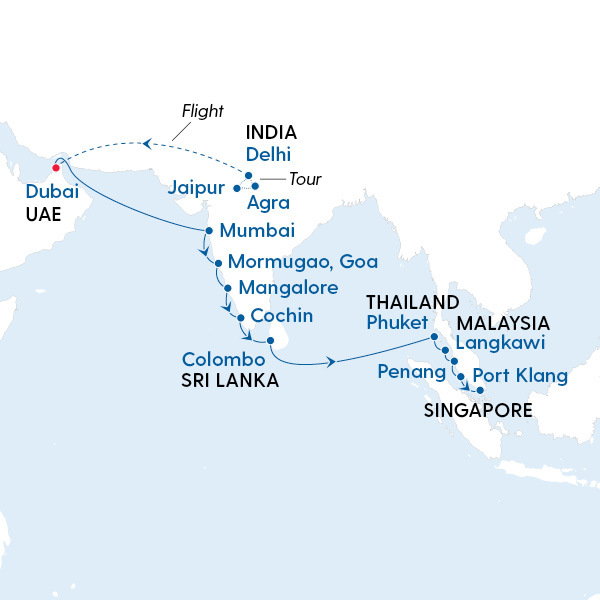