Your Rome to Athens Cruise
14 Night Cruise from Rome to Athens Onboard Azamara Pursuit in a Club Interior Stateroom
Onboard Dining Across A Range Of Complimentary Venues
Bonus Beverage Package onboard including select standard spirits, international beers & wines
Complimentary AzAmazing Evenings® event (on most voyages)
Onboard Entertainment including Live Music & Performances
Bottled water, soft drinks, specialty coffees and teas
Onboard Prepaid Gratuities
Onboard All Port Taxes & Charges
Concierge services for personal guidance and reservations
Shuttle service to and from port communities, where available
Self-service laundry

Endless adventures await in Rome. With two and a half thousand years of history, art and culture, it is no wonder Rome is one of the most visited cities on the planet. Gaze at the masterpieces of the Vatican or walk into the past with visits to ancient relics, historic monuments and legendary museums. Or people-watch while sipping on an espresso in a quaint cafe. Enjoy 2 nights hotel stay to explore Rome.

Embark your 14 night cruise from Rome onboard Azamara Pursuit.

Sorrento is known as the gateway of Capri. Filled with pedestrian-only streets and stunning restaurants who use lemon as the key flavour in just about everything. Isle of Capri is just off the coast and is a must visit to see the famed Blue Grotto, a stunning glowing cave which can’t be found anywhere else in the world.

The Amalfi coastline is undoubtedly, one of the most beautiful destinations in the world. The colourful beach side towns fuse oceans and mountains, creating the perfect backdrop for a local limoncello. Spend the day driving through the winding hills or relax on the beaches under your own lido.

Argostoli managed to survive the Italian and German occupation and the Greek civil war. However, a disastrous earthquake struck not long after, destroying all man made buildings in the entire region! The town is laid out in an easy-to-navigate path, filled with restaurants, cafes and a busy harbour to cater to the tourists that visit every year. For a delicious seafood feast, head to Kiani Akti which is situated in an incredible spot on.

Known for its 14th-century Venetian harbour, narrow streets and waterfront restaurants, Chania is a quaint town on the island of Crete in Greece. Taste the traditional cuisine in the small taverns and small cafes around the old harbour. Be sure to explore Venetian ruins as you enjoy your snooping at the market hall.

Welcome to Athens, the historical capital of Europe. Welcome to the birthplace of democracy, arts, science, and philosophy of western civilisation. Home of Plato, Socrates, Pericles, Euripides, Sophocles, Aeschylus. Athens is one of the world’s oldest cities. Its recorded history spanning around 3.400 years and it is being inhabited since the 11th millennium B.C. E. Today, under the shadow of the Parthenon, the contemporary urban scenery of the sprawling city reflects its exciting history, its multi-cultural modern personality as well as the infrastructure and facilities.

The small island of Patmos is a birthplace for Christianity. The last book of the New Testament was allegedly written in the city, visit the Monastery of Saint John the Theologian which towers over the city. The seafood here is incredibly fresh and the cheese pie is a must!

Wander the atmospheric old alleys, marvel at the massive Venetian walls and explore The Palace of Knossós in this beautiful port city Heraklion – the capital of the Greek island of Crete.

Disembark Azamara Pursuit in Athens today, farewell as you board your flight home or ask about our flexible flights and extend your stay.

Welcome on board Azamara Pursuit, the newest addition to the Azamara fleet. The mid-sized ship is equipped with modern features, visiting more ports and spending more time in destination. She boasts 10 incredible dining options, cafes and lounges, sun-soaked pools, timber-clad decks, relaxation spas, fitness centres, daily activities and nightly entertainment. Pursuit is your perfect home away from home whilst you explore the unique cities on your itinerary. Start and end your days with exceptional dining in Aqualina, Prime C, Discoveries Restaurant plus various casual dining and cafe options. Don’t forget about the renowned AZAmazing Evenings where you’ll be treated to a truly special experience.

Travel based on Cruise Departure 1 April 2023 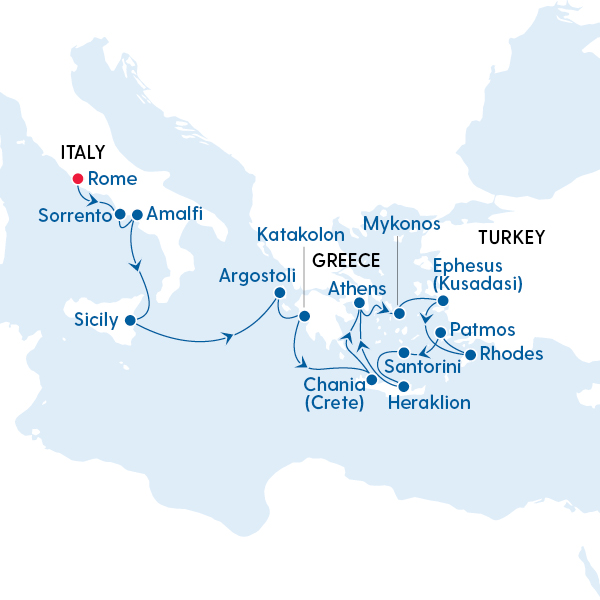