Explore the beautiful concrete jungle that is New York City. Spend your day visiting the prosperity bull on Wall Street, seek out panoramic views from the Empire State Building and gaze upon the city from the architecturally pleasing Brooklyn Bridge. You’re also spoilt for choice with the Guggenheim and the Met.

Embark your cruise today and sail out of this iconic city.

Welcome to the bustling port of Southampton, today you’ll fly from Southampton to Amsterdam.

Founded by the Romans, Cologne is one of Germany’s oldest cities. Explore the old town with its beautiful squares, local markets, and historical monuments. The highlight of this stop is the magnificent World–Heritage-listed Gothic Cathedral. If you fancy going further afield book an excursion to Drachenburg Castle or Bruhl, famous for the Augustus Palace and Falkenlust. Discover gems of the past in the Old Town and explore the modern city which was rebuilt after World War 2. Cologne boasts the World-Heritage listed Gothic Cathedral as well as museums, galleries, and a Roman artifact museum!

Located in the Rhine Valley, Germany, Rudesheim is best known for winemaking, especially of Riesling wines. In the town centre, visit Drosselgasse, a local laneway lined with shops, taverns, and restaurants. Nearby, Siegfried’s Mechanical Music Cabinet is a museum of automated musical instruments. Medieval Brömserburg Castle is home to the Rheingau Wine Museum, exhibiting wine paraphernalia from ancient times to the present.

Flowing through the German states of Bavaria, the shores of the Main River is lined with picturesque towns and beautiful scenery. Set ashore and explore one of the Bavarian villages. Sample some of the local delicacies and wines on offer.

Würzburg is at the heart of Franconian wine country, surrounded by sloping hills covered with vineyards. The city has many wine bars, cellars and wineries where you can try the local wine in the characteristic Bocksbeutel bottles. After a walking tour of the city make sure to visit UNESCO World Heritage Site, the Bishops’ Residenz. One of Germany’s largest and most ornate baroque palaces featuring the elaborate staircase, 18th Century frescoes by Tiepolo, and the amazing 3–dimensional stuccowork. Close to Würzburg are other fantastic attractions such as Rothenburg, a perfectly preserved fortified town dating back to the middle ages, boasting unique gothic, renaissance and baroque architecture.

Regensburg, one of Germany’s best-preserved medieval cities and home to the oldest bridge to cross the Danube. Wander through the city and have a look at the Old Town Hall, or perhaps book an excursion to Weltenburg Abbey.

Dating back to the 9th Century, Bamberg is a classic Bavarian township preserved in time. Marvel at the towers and stone carvings of the Romanesque Bamberg Cathederal.

Most of the area’s tourist attractions are related to its old architecture, with structures in place that were originally built in the 1530s. In the centre of town, the Marktplatz (Market Square) is a charming area full of shops and restaurants. Surrounded by cheerfully painted buildings and a cobblestone walk, it’s like stepping back into time as you take a break from the hustle and bustle of life.

Regensburg, one of Germany’s best-preserved medieval cities and home to the oldest bridge to cross the Danube. Wander through the city and have a look at the Old Town Hall, or perhaps book an excursion to Weltenburg Abbey.

Passau in Germany is home to Europe’s largest church organ which has more than 17,000 pipes, sitting inside St. Stephen’s Cathedral with it’s amazing baroque architecture. Wander the narrow cobblestone streets and admire the Oberhaus Fortress looming above the town. If you are a fan of ‘The Sound of Music’ or Mozart, the excursion to Salzburg is a must!

Welcome to Vienna! This famous European capital city is known for its fabulous palaces, museums and architecture, as well as the people who have called the city home such as Mozart, Beethoven, and Freud. There a many guided walking experiences available or if you’d prefer to experience the city as a local, take a guided walk that highlights Viennese essentials, such as coffee, sausages, wine, music and public transportation. No visit to this beautiful city is complete without music, so you’ll be treated to an exclusive private “Royal Anniversary” concert, celebrating Maria Theresa’s 300th birthday and legacy in a Viennese palace.

Journey on the classic funicular up to Castle Hill to Buda’s Old town where the local museum traces city life from Roman times onward. Stroll Trinity Square, home to the 13th Century Matthias Church and the turrets of the Fishermen’s Bastion. Farewell Budapest today as board your flight home or ask us about our flexible flights & extend your stay.

The remastered Queen Mary 2 was launched on the 23rd of June 2016. The brand new interior of the ship has been carefully planned to incorporate Cunard’s history and style as a traditional luxury cruise line alongside modern contemporary features. With all new concepts in some of the communal areas, new furnishings in all the suites the Queen Mary 2 really has had the Royal treatment during her refurbishment!

Immerse yourself in the picturesque view as you meander along the waterways of the world. Watch centuries of history slowly pass you by from the comfort of your Panoramic Suite. Tempt your taste buds as you cruise your way through local delicacies and cuisines. Expert onboard Cruise Directors share their local secrets throughout your river cruise journey to create a truly personalised experience. From the moment you step onboard the modern & award-winning river cruise fleet, you are transported into a relaxed luxury that encompasses your entire journey. 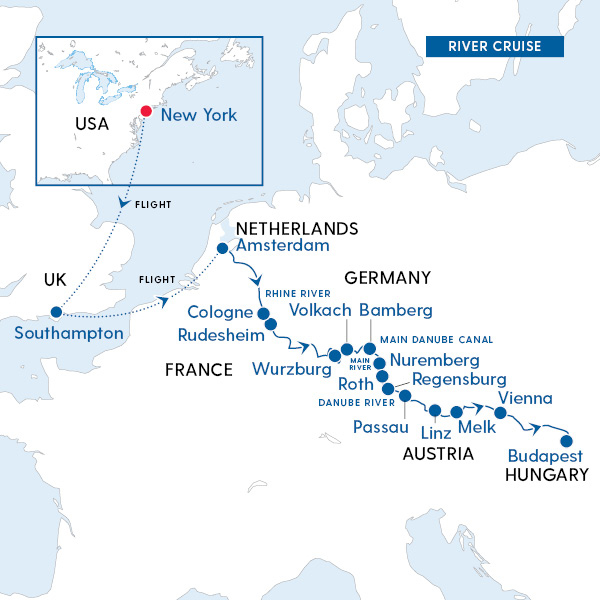