Processing...
Home › Packages › Discover the Islands of the Mediterranean

Discover the Islands of the Mediterranean

Your Mediterranean Cruise
11 Night Cruise from Athens to Barcelona Onboard Azamara Pursuit in a Club Interior Stateroom
Onboard Dining Across A Range Of Complimentary Venues
Bonus Beverage Package onboard including select standard spirits, international beers & wines
Complimentary AzAmazing Evenings® event (on most voyages)
Onboard Entertainment including Live Music & Performances
Bottled water, soft drinks, specialty coffees and teas
Onboard Prepaid Gratuities
Onboard All Port Taxes & Charges
Concierge services for personal guidance and reservations
Shuttle service to and from port communities, where available
Self-service laundry

Welcome to Athens, the historical capital of Europe. Welcome to the birthplace of democracy, arts, science, and philosophy of western civilisation. Home of Plato, Socrates, Pericles, Euripides, Sophocles, Aeschylus. Athens is one of the world’s oldest cities. Its recorded history spanning around 3.400 years and it is being inhabited since the 11th millennium B.C. E. Today, under the shadow of the Parthenon, the contemporary urban scenery of the sprawling city reflects its exciting history, its multi-cultural modern personality as well as the infrastructure and facilities. Enjoy 1 nights hotel stay to explore Athens.

Embark your 11 night cruise from Athens onboard Azamara Pursuit.

Wander the atmospheric old alleys, marvel at the massive Venetian walls and explore The Palace of Knossós in this beautiful port city Heraklion – the capital of the Greek island of Crete.

Feel history laid out before you in magnificent panoramic views on the way up to the town, where you can stroll down medieval lanes. See the famed Greek Theatre (Teatro Greco) and its fantastic view of Mount Etna. Or take a trip to the volcano itself and get a first-hand look at cones, craters and lava streams left by its eruptions over time. The colourful Corso Umberto is great to people-watch and get your fill of yummy gelato.

Sorrento is known as the gateway of Capri. Filled with pedestrian-only streets and stunning restaurants who use lemon as the key flavour in just about everything. Isle of Capri is just off the coast and is a must visit to see the famed Blue Grotto, a stunning glowing cave which can’t be found anywhere else in the world.

Known for the medieval San Simplicio basilica and cafes dotting central squares like Piazza Matteotti, Olbia is sure to delight.

Ajaccio is the Capital of Corsica France. The birthplace of Napoleon Bonaparte, you can vist his home – Maison Bonaparte which is now a museum dedicated to his life. This beautiful city has a rich history, with many wonderful inlets & beaches to visit. There is also the Museum of Fine Arts is named after Napoleon’s uncle, Joseph Fesch- Musee Fesh. Filled with works from Giovanni Bellini, Michelangelo, Veronese & more.

One of Spains Balearic Islands, Menorca is known for its endless beaches, turquoise-watered bays & pine trees that fringe the coast.

The city was founded 2100 years ago and is overflowing with history. Wander the cobblestone streets and alleyways that surround the Gothic cathedral as the focal point of Palma.

Farewell Barcelona today as you board your flight home or ask about our flexible flights and extend your stay.

Welcome on board Azamara Pursuit, the newest addition to the Azamara fleet. The mid-sized ship is equipped with modern features, visiting more ports and spending more time in destination. She boasts 10 incredible dining options, cafes and lounges, sun-soaked pools, timber-clad decks, relaxation spas, fitness centres, daily activities and nightly entertainment. Pursuit is your perfect home away from home whilst you explore the unique cities on your itinerary. Start and end your days with exceptional dining in Aqualina, Prime C, Discoveries Restaurant plus various casual dining and cafe options. Don’t forget about the renowned AZAmazing Evenings where you’ll be treated to a truly special experience.

Travel based on Cruise Departure 14 May 2023 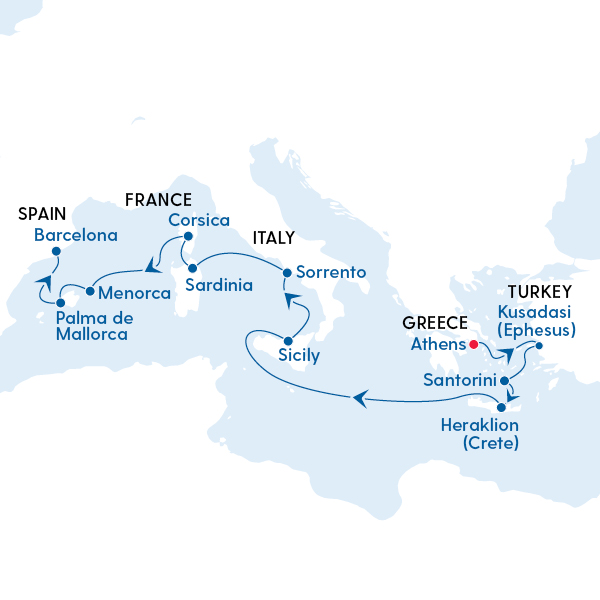