Day 1- 2: Athens, Greece
Enjoy a 2 Night Hotel Stay to discover the historical capital of Europe, Athens. Welcome to the birthplace of democracy, arts, science, and philosophy of western civilisation. Home of Plato, Socrates, Pericles, Euripides, Sophocles, Aeschylus. Athens is one of the world’s oldest cities. Its recorded history spanning around 3.400 years and it is being inhabited since the 11th millennium B.C. E. Today, under the shadow of the Parthenon, the contemporary urban scenery of the sprawling city reflects its exciting history, its multi-cultural modern personality as well as the infrastructure and facilities.

Day 4: Kusadasi (Ephesus), Turkey
Ephesus was an ancient Greek city on the coast of Iona in Turkey. It is said that this city of Ephesus was created by Androclosthe son of the king of Athens. Take a trip to see the 10th-century ruins there including the Temple of Artemis a shrine of the goddess Artemis. Ephesus is also said to be home the House of Virgin Mary, as well as the St John Basilica.

Day 5: Istanbul, Turkey
Dive into this historic city, with dramatic architecture & colourful streets. Do not miss The Hagia Sophia constructed in 537 AD this monumental structure is still standing as a museum, see the outstanding tile work of The Blue Mosque. The Grand Bazaar is a wonderful marketplace is a kaleidoscope, of colourful lamps & spices. Descend below ground to see the mysterious Basilica Cistern, the cities ancient reservoir.

Day 6: Constanța, Romania
Constanța is a city on the shores of the Black Sea, in southeastern Romania. Its long history, which goes back over 2,000 years, is documented at the National History and Archaeology Museum, near the port. The adjacent Roman Mosaics complex displays tiled floors dating back to the 4th century A.D. Nearby, the Great Mahmudiye Mosque is furnished with a vast Persian rug, while its towering minaret overlooks the city.

Day 7: Odessa, Ukraine
Odessa is a port city on the Black Sea in southern Ukraine. It’s known for its beaches and 19th-century architecture, including the Odessa Opera and Ballet Theater. The monumental Potemkin Stairs, immortalized in “The Battleship Potemkin,” lead down to the waterfront with its Vorontsov Lighthouse. Running parallel to the water, the grand Primorsky Boulevard is a popular promenade lined with mansions and monuments.

Day 8: Varna, Bulgaria
Varna is a port city and seaside resort on Bulgaria’s Black Sea, next to the coastal resorts of Golden Sands, St. Konstantin and Albena. It’s famous for the “Gold of Varna,” 6,000-year-old Thracian jewelry discovered in a necropolis, which is displayed inside the Archaeological Museum, along with Greek, Roman and Ottoman antiquities. A bar-lined waterfront promenade fronts 19th-century Primorski Park.

Day 9: Nessebar, Bulgaria
Nessebar is a town in Burgas Province, on Bulgaria’s Black Sea coast. The cobbled streets of the old town, which sits on a promontory, are lined with ruins such as Byzantine-era fortifications and baths. The ruins of the 5th-century Church of St. Sofia include stone columns and large arched windows. The 11th-century Church of St. Stephen houses hundreds of mural paintings and a huge, richly decorated altarpiece.

Day 10: Mykonos, Greece
Explore this quintessential Greek island with pristine white houses with blue accents and beautiful beaches. Once you’ve seen one of the famous sunsets, you’ll understand why this is the most visited island in the region!

Day 11: Santorini, Greece
Santorini is one of the most formidable islands in the world, famed for beautiful food, pristine water and unrivalled sunsets, in the foreground are the post card whitewashed buildings. Perceptions are had about the lost city of Atlantis being located here due to Santorini’s subtle mystery.

Day 12: Athens, Greece
Farewell Athens today as board your flight home or ask us about our flexible flights & extend your stay.

Travel based on Cruise Departure 26 April 2023

“Prices are per person twin share in AUD, and subject to availability and currency fluctuations.
Pricing is subject to change until reservation is confirmed. Accommodation is subject to change and availability.
Surcharges may apply. Flights may not be direct or operate daily. Itinerary and inclusions are subject to change.
Disruptions to cruising and itinerary may occur. Shore excursions and other items such as alcoholic beverages & laundry are an additional cost. Should gratuities or hotel service charges not already be included in your package, these are mandatory and charged by the cruise line to your onboard account on a day by day basis.
Itineraries are subject to change at any time without notice.
Please note – onboard benefits valued at has been converted into Australian Dollars from the onboard currency. Details of the onboard currency can be provided by your consultant at the time of enquiry.
Due to security reasons, all guests must be on board 2 hours before sailing.
Disembarkation usually begins 2 hours after docking.
These fares/prices may change due to availability or currency fluctuations.
Please note upgrade amounts advertised may be based on lead in obstructed view staterooms.
Please note that a majority of US based (including Hawaii) hotels impose a daily mandatory additional charge that is automatically added to your bill by the hotel. There are various inclusions provided for these resort fees. These fees are separate from, cannot be prepaid prior to arrival and are in addition to our advertised package.
Please note many European hotels charge a nominal daily City Tourist Tax which is utilised locally for tourism-related purposes and to improve the local infrastructure in the area. This tax is collected by the hotels directly from the customer and the amount can vary by region, hotel size or type. Local regulations state this must be collected by the hotel and cannot be prepaid.
All passports, vaccinations and visas are the responsibility of the travelling guest to secure prior to departure from Australia. ” 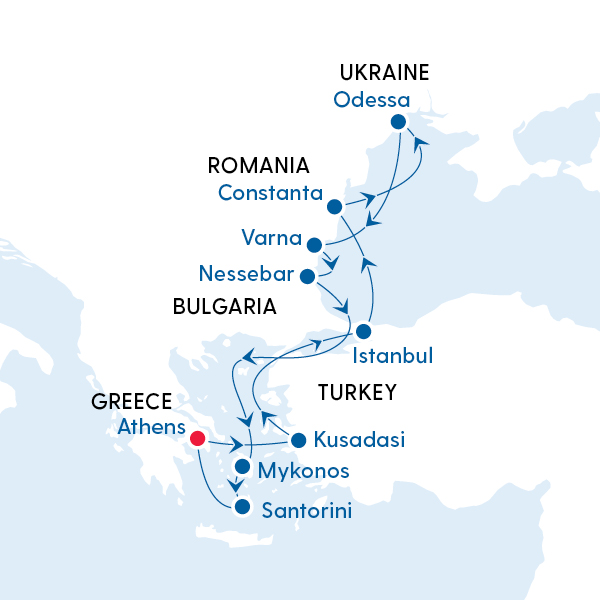