Your Norwegian Cruise Line
19 Night Cruise from Stockholm to Southampton Onboard Norwegian Dawn in an Inside Stateroom
Onboard Dining Across A Range Of Complimentary Venues
Onboard Entertainment including Live Music & Performances
Onboard All Port Taxes & Charges
Bonus Onboard Beverage Package with Cocktails, Spirits, Wine, Beer & Soft Drinks
Bonus Onboard WiFi Package
Bonus Onboard Specialty Dining Package
Bonus Shore Excursion Credit
Bonus Onboard Prepaid Gratuities (valued at $772)

Welcome to Stockholm, where your 2 night stay awaits you. Laced by an ingenious network of waterways and bridges strung between a freshwater lake and the sea, Stockholm is easily seen on foot or by waterway cruise. Its gabled old townhouses peer over cobblestone streets, while its magnificent 17th-century palace sits watching over the harbour. There’s plenty to do in this magical city, it’s almost guaranteed that you’ll want to revisit to explore everything on offer.

Welcome to the capital of Latvia! Riga is situated on the Baltic Sea and is regarded as one of the cultural hubs of Europe with countless museums and concert halls. The Old Town is car free, filled with local restaurants and shops whilst the bars and nightclubs of Livu Square come to life in the evenings.

When you arrive in the Bay of Gdansk you come into the most fascinating region of the Baltic Sea and of Northern Europe. In Gydnia you’ll find two interesting museum ships, the oceanographic museum, aquarium and Naval Museum. Or take an excursion to Gdansk, a city which, because of the importance of its port, has a very rich history.

Kiel’s series charmless indoor malls linked by pedestrian bridges is a beautiful feature of this German city once obliterated during WWII by bombing raids. Follow Kiel’s main thoroughfare, the pedestrianised Holstenstrasse, to the Schlossgarten to reach the waterfront, marvel here at new warships being built for nations worldwide, and all manner of ships big and small.

Welcome to the capital of Scotland! This hilly city boasts a preserved, medieval Old Town and an invigorating Georgian New Town with stunning gardens. Edinburgh Castle keeps watch over the city, withholding Scotland’s crown jewels and the Stone of Destiny which is used in the coronation of Scottish rulers. A must visit is Calton Hill, topped with historic memorials and monuments.

In Kirkwall join the cruise team to visit Skaill House a 17th century mansion with the best preserved prehistoric village in Europe in its grounds. Whiskey fans must visit Highlands Park, the most Northerly Whiskey distillery in the world for a tasting of the unique Whiskey and a tour of the distillery.

Explore Belfast’s cultural quarters—the Cathedral Quarter, the Gaeltacht Quarter, the Queen’s Quarter and the Titanic Quarter—the former linen and shipbuilding epicenter. Here, where the Titanic was so carefully built, you can see beautifully restored Victorian architecture. Enjoy the true Irish experience at the lively waterfront, which is a friendly hub of live music, overflowing pubs and modern art.

With a history that dates back more than 800 years, Liverpool has been a major port for centuries. The awe-inspiring architecture, and amazing restaurants are just the beginning of this exciting city. The art scene is probably best known for the Beatles, and you can visit where it all began for them. The amazing galleries, theatres and museums make Liverpool a cultural capital.

Dublin is thought to be almost a thousand years old, but the city has transitioned seamlessly into the 21st century. Must-do’s include Trinity College, St. Stephen’s Green Park, Newgrange, Dublin Castle, the National Museum of Ireland and the James Joyce Cultural Center. No visit to Dublin would be complete without a pint of Guinness on a relaxing afternoon.

Farewell from England as you disembark your ship from Southampton Port for your flight home or ask us about our flexible flights & extend your stay.

Explore the Old Town of Sweden with it’s colourful houses & cobblestones during your included city stay. Port call highlight; Marvel at the Golden Spires in St Petersburg. Port call highlight; Visit Belfast & choose to explore the Unesco World Heritage Site of Giant’s Causeway. Ask us about our flexible flights and extend your stay and explore more of Europe 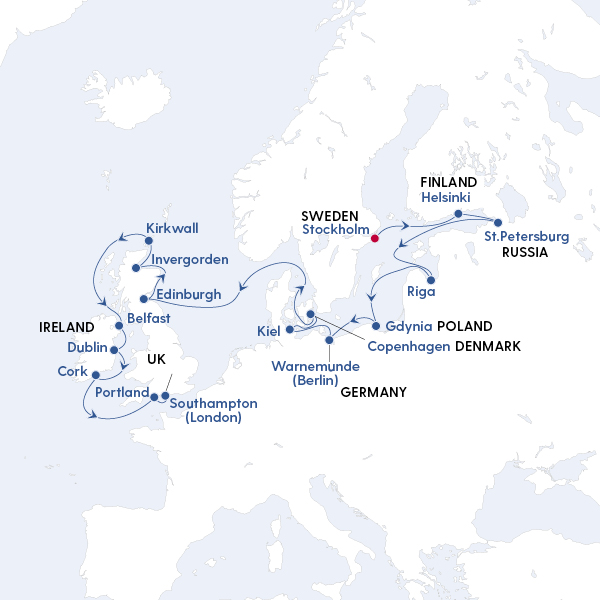