Your 12 Night Luxury Azamara Cruise
12 Night Cruise Onboard Azamara Journey in an Interior Stateroom
Bonus Onboard Beverage Package including Select Standard Spirits, Beers & Wines
Onboard Dining Across A Range Of Complimentary Venues
Onboard Entertainment including Live Music & Performances
Complimentary AzAmazing Evenings® event
Onboard Gratuities included
Onboard All Port Taxes & Charges
Shuttle service to and from port communities, where available
Enjoy More Time Ashore with 2 Overnight Stays Onboard in Cape Town

Welcome to Johannesburg, South Africa’s biggest city and capital of Gauteng province. On arrival at the airport, you will be met & be transferred by road to Black Rhino Safari Lodge for a 3-night stay.

Black Rhino is a hidden treasure set within the Tamboti Forest at the foot of an ancient volcanic crater with the 58 000 ha Pilanesberg National Park. This area has become renowned as one of South Africa’s most exciting big five eco-tourism destinations. Morning & Afternoon Game Drives will be provided during your Black Rhino Safari stay. Plus, all meals included during your stay.

After check out from the Black Rhino Safari Lodge, you will be transferred back to Johannesburg airport for your flight to Cape Town to embark on your 12 Night Luxury Cruise Onboard Azamara Journey.

East London is a city on the Indian Ocean, in South Africa’s Eastern Cape. It’s known for its beaches, such as Nahoon and Cove Rock. The Buffalo Pass is a road crossing a forested valley and the Buffalo River. Fossilised human and animal footprints, plus artifacts from the Xhosa-speaking people, are exhibited at the East London Museum. Elephants, lions, zebras and other wildlife roam in several nearby game reserves.

Maputo is the capital of Mozambique. Home to a rich history of Portuguese colonial architecture, situated along the downtown Baixa neighborhood. Make a visit to the tranquil Tunduru Botanical Gardens or spend a few hours shopping at the Municipal Market.

Durban is South Africa’s third-largest city and the continent’s largest port. Durban’s expansive beachfront on the eastern edge of the centre has one of the city’s busiest concentrations of restaurants, a surfeit of tacky family entertainment. Visit the bazaars, alleyways and mosques that make up the Indian area around Dr Yusuf Dadoo Street.

Your days at sea will allow you to take full advantage of everything the ship has to offer. Seek out hidden treasures and make the most of the facilities onboard. All of the ships activities can be found on the vessels daily newsletter. If relaxation is on your mind then your sea day will allow you to sit back, soak in ship life and watch the world as it floats by you.

You will dock in Cape Town & spend two nights onboard in this vibrant city. Cape Town is situated beneath the imposing Table Mountain. Slowly rotating cable cars climb to the mountain’s flat top, from which there are sweeping views of the city, the busy harbour & boats heading for Robben Island, the notorious prison that once held Nelson Mandela, which is now a living museum. You can also explore Cape Town’s famous wine trail or visit the Cape of Good Hope.

Disembark your cruise and make your way to the airport for your return flight home or ask us about our flexible flights to explore more of Africa.

Welcome on board Azamara Journey! Refurbished in 2016, this vessel accommodates just under 700 passengers across her five opulent decks. She boats 6 dining options, a casino, a theatre, a pool, jacuzzis, a spa, a gym and a running track, the Azamara Journey has everything you need for a relaxing luxury cruise.

Everything is taken care of on Azamara Journey (all meals, drinks and outstanding customer service included!). Whether you want to spend your free time between ports soaking up some sun by the pool, playing a hand in the casino or relaxing in the library, there is something for everyone on the Azamara Journey. While sailing with Azamara Club Cruises you will have the opportunity to really get to know the destinations you are visiting, with fantastic excursions available both during the day and in the evening. Plus, the renowned Azamazing Evenings, which make for a perfect night in any part of your cruise

Tick a safari off your bucket list on this once in a lifetime adventure.
Black Rhino Safari Lodge – Home of the Big 5
Cruise the coast of South Africa, immersing yourself in culture as you go.
Relax onboard in Luxury with Azamara Cruises.

Travel based on Cruise Departure 8 February 2023 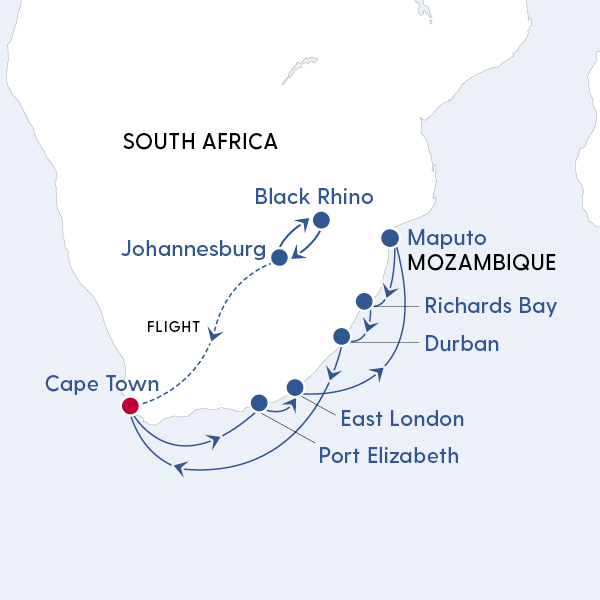