Your 9 Night Luxury Azamara Cruise
9 Night cruise from Dublin to Reykjavik onboard Azamara Pursuit in an interior stateroom
Onboard Dining Across a Range of Complimentary Venues
Complimentary AzAmazing Evenings® event
Onboard Entertainment Including Live Music & Performances
Onboard Gratuities
All port taxes & charges
Complimentary Shuttle service to and from port communities, where available
Bonus Onboard Beverage Package featuring Standard Spirits, International Beers & Wines

Dublin is thought to be almost a thousand years old, but the city has transitioned seamlessly into the 21st century. Must-do’s include Trinity College, St. Stephen’s Green Park, Newgrange, Dublin Castle, the National Museum of Ireland, and the James Joyce Cultural Centre. No visit to Dublin would be complete without a pint of Guinness on a relaxing afternoon.

Situated in a vast fjord and encompassed by snow-capped mountains, lies the quaint town of Seydisfjordur. There are few places on earth that are as picturesque or peaceful as this place, she boasts a range of colourful wooden buildings dating back to the 19th century including the famed Blue Church. You’ll more than likely see a waterfall as the area is home to 25 of these beautifully formed, natural wonders.

Húsavík is a town in Norðurþing municipality on the north coast of Iceland on the shores of Skjálfandi bay with 2,307 inhabitants. The most famous landmark of the town is the wooden church Húsavíkurkirkja, built-in 1907.

Iceland’s second-largest city is home to integral ship ports and fishing centres. Enjoy a bustling nightlife and gourmet food amongst stunning snow-capped mountains and fjords or soak up the robust folk culture. Whatever you choose, it will be memorable.

Skagafjörður is a deep fjord and its valley in northern Iceland.

Welcome to Isafjordur, home to towering peaks of untouched wilderness. The prosperous fishing town was formed by ancient volcanoes and settled in the ninth century by Vikings. Explore the narrow streets and 18th-century timber structures that fill the town then spend some time learning about the history of the region. If you’re feeling active then take part in horseback riding, bird watching, kayaking, or hiking in the hills.

Iceland’s capital and largest city was settled in 877 AD and has grown into an integral seaport and government hub. Even though it is a considerably advanced and progressive destination, it still uses water from nearby geysers to heat all of its buildings.

Welcome onboard Azamara Pursuit, the newest addition to the Azamara fleet. The mid-sized ship is equipped with modern features, visiting more ports and spending more time in the destination. She boasts 10 incredible dining options, cafes and lounges, sun-soaked pools, timber-clad decks, relaxation spas, fitness centres, daily activities, and nightly entertainment. Pursuit is your perfect home away from home whilst you explore the unique cities on your itinerary. Start and end your days with exceptional dining in Aqualina, Prime C, Discoveries Restaurant plus various casual dining and cafe options. Don’t forget about the renowned AZAmazing Evenings where you’ll be treated to a truly special experience.

Travel based on Cruise Departure 7 August 2022 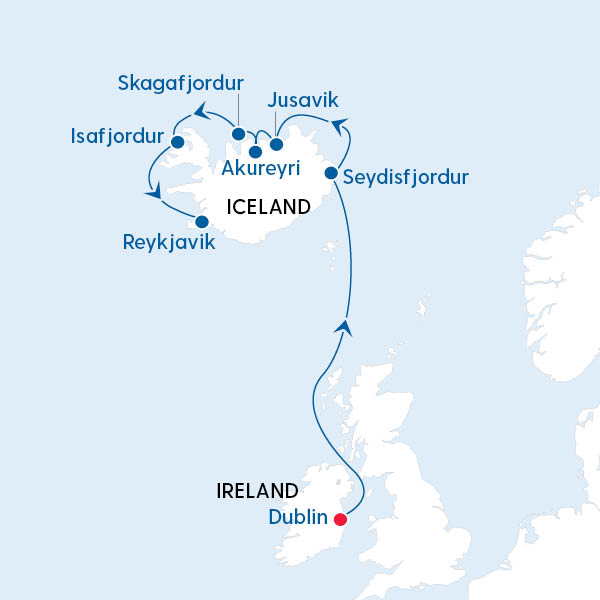