Your Japan Cruise
15 Night Cruise from Tokyo Onboard Azamara Journey in a Club Interior Stateroom
Onboard Dining Across A Range Of Complimentary Venues
Bonus Beverage Package onboard including select standard spirits, international beers & wines
Complimentary AzAmazing Evenings event (on most voyages)
Onboard Entertainment including Live Music & Performances
Bottled water, soft drinks, specialty coffees and teas
Onboard Prepaid Gratuities
Onboard All Port Taxes & Charges
Concierge services for personal guidance and reservations
Shuttle service to and from port communities, where available
Self-service laundry

Tokyo, Japan’s busy capital, mixes the ultramodern and ancient traditions, crafting a city unlike anywhere else. In Tokyo, you can walk amongst neon-glowing skyscrapers and historical temples which make for a truly unmatched experience. Enjoy 1 nights hotel stay to explore Tokyo.

Embark your 15 night Wonders of Japan cruise from Tokyo onboard Azamara Journey.

Here, nature and culture fuse as one. The Shirakami Mountains, which embrace the world’s largest virgin forest of beech trees, have been awarded a World Heritage Site designation. Reminders of ancient times abound throughout Aomori Port as well, and you can also indulge in the serene atmosphere of the Sannai-Maruyama Ruins, Japan’s largest, which are said to have been established around 4,000 to 5,000 BC. Stroll Aomori’s premiere Shinsen Ichiba seafood market where restaurateurs hand-pick fresh produce then slurp up delicious ramen noodles at one of its counter restaurants.

Welcome to Akita, head to the stunning traditional gardens of Senshu Park home of the historic Kubota Castle. Wander the grounds & experience traditional Japans grandeur & beauty. See the amazing Aoyagi Samurai House one of the best-preserved manors in Japan.

Niigata is a port city on Honshu, Japan’s main island. The Minatopia history museum complex includes heritage buildings like the 19th-century Niigata Customs House. Along the seacoast, the Marinepia Nihonkai aquarium has sea otters and dolphins. Part of the Northern Culture Museum, the Ito Estate was home to a wealthy 1800s family and displays their art collection. South are the hot springs of Iwamuro

Wedged between sea, sky and mountains, this small fishing port has been esteemed for centuries for its superb seafood. West of the city lies Izumo-taisha, one of the oldest and holiest shrines in Shinto. This area is dotted with burial mounds from Japan’s Bronze Age. The town of Matsue boasts the celebrated “Black Castle,” a six-story, black-walled castle that home to a clan of the mighty Tokugawa dynasty that ruled Japan for over 250 years. Also, a common sight ashore are the Yokai – approximately 100 bronze statues of supernatural characters as imagined by famed manga comic author Shigeru Mizuki, who was born in Sakaiminato.

While paying tribute to the infamous nuclear attack that destroyed the city in 1945, Hiroshima is now defined as a beacon of peace and prides itself on its exceptional natural beauty. None more iconic than 300 cherry blossom trees in bloom at Peace Memorial Park and enjoy local delicacies.

Takamatsu is home to 16th century heritage including moats, ruins and turrets. Stroll through the scenic hills, bridges and islands or sip on matcha at a traditional tea house. Fresh seafood and famous noodle dishes await on the waterfront where there has been an influx of boutiques and restaurants.

Named after its origin, famous Kobe beef is one of the delicacies to enjoy at the many gourmet restaurants. Kobe is situated between mountains and the sea, it is Japan’s sixth-largest city and a port bustling with culture and fine cuisine. Spend 1 night on board in port.

In the shadow of Mount Fuji, Shimizu is one of the most beautiful ports in Japan. Walk through the pine groves of Miho, home to a 650-year-old Japanese black pine, or enjoy spectacular views of Mount Fuji from the lush, forested hill of Nihondaira. Take in the seascapes on a bay cruise, or learn of undersea delights at Japan’s first sushi museum, and get a glimpse at feudal life in Japan in 200 BC at the archaeological site of Toro.

Tokyo, Japan’s busy capital, mixes the ultramodern and ancient traditions, crafting a city unlike anywhere else. In Tokyo, you can walk amongst neon-glowing skyscrapers and historical temples which make for a truly unmatched experience. Spend the night on board in port.

Disembark Azamara Journey in Tokyo, farewell as you board your flight home or ask about our flexible flights and extend your stay.

Welcome on board Azamara Journey! Refurbished in 2016, this vessel accommodates just under 700 passengers across her five opulent decks. She boats 6 dining options, a casino, a theatre, a pool, jacuzzis, a spa, a gym and a running track, the Azamara Journey has everything you need for a relaxing luxury cruise.

Everything is taken care of on Azamara Journey (all meals, drinks and outstanding customer service included!). Whether you want to spend your free time between ports soaking up some sun by the pool, playing a hand in the casino or relaxing in the library, there is something for everyone on the Azamara Journey. While sailing with Azamara Club Cruises you will have the opportunity to really get to know the destinations you are visiting, with fantastic excursions available both during the day and in the evening. Plus, the renowned Azamazing Evenings, which make for a perfect night in any part of your cruise.

Travel based on Cruise Departure 19 March 2024 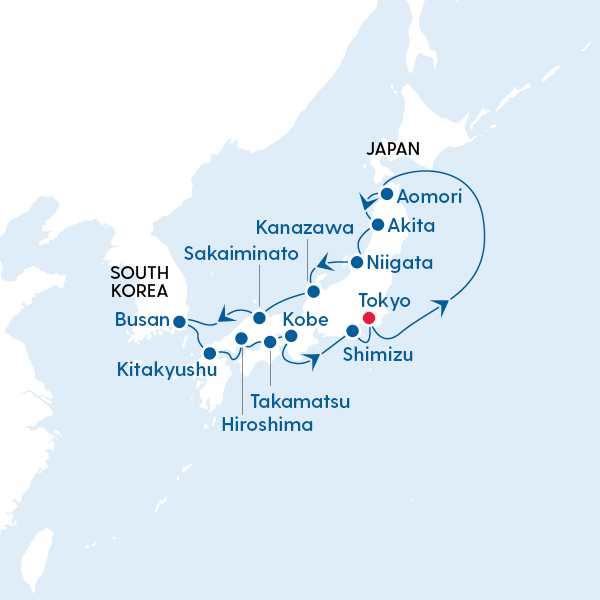