On arrival at Václav Havel Airport Prague International Airport make your own way to your Prague hotel, where you will spend the next to days at leisure exploring the city of Prague.

Bisected by the Vltava River, the nicknamed “the City of a Hundred Spires,” is home to colourful baroque buildings, Gothic churches & and the infamous medieval Astronomical Clock, all within the cities Old Town Square; the heart of the cities historic core. Outside the Old Town Square wander across the Charles Bridge, explore Prague Castle, and treat your tastebuds to beer & Czech Tapas.

On check out from your Prague hotel may your way to the Prague rail station (Praha Hlavni Nadrazi) for your scenic rail journey to Munich. On arrival at Munich rail station make your own way to your Munich hotel.

Munich, Bavaria’s capital, is home to centuries-old buildings and numerous museums. The city is known for its annual Oktoberfest celebration and its beer halls, including the famed Hofbräuhaus, founded in 1589. In the Altstadt (Old Town), central Marienplatz square contains landmarks such as Neo-Gothic Neues Rathaus (town hall), with a popular glockenspiel show that chimes and reenacts stories from the 16th century

On check out from your Munich hotel may your way to the Munich rail station for your scenic rail journey to Cologne. On arrival at Cologne rail station make your own way to your Cologne hotel.

Cologne is renowned for what became known as Advent or Christmas Markets held month-long markets that sold toys, nuts and sweets. The most popular and best-known is in front of the famous Cologne Cathedral – the organisers expect over 4 million visitors each year to the 150 stands in the Roncalliplatz. But there are quite a few others on offer – some in the centre and some in quieter parts of the city.

Morning at leisure to explore this cathedral city, with its wealth of monuments and attractions.

On check out from your Cologne hotel make your way to the cruise dock for your 9 night exciting Rhine cruise onboard Arosa. From Cologne, you will be heading for the northern or the southern Rhine. Embark cruise 5:00 pm

The town describes its biggest attraction, the world-famous Drosselgasse, as ‘144 metres of Joie de Vivre. This centre of Rhine Romanticism once inspired poets and musicians – it was here that Brahms composed his Symphony No. 3. Rüdesheim is the best-known spot in the Rheingau and has plenty of cultural attractions, including stately homes and fortifications. And no visit to the towns and countryside of this area of the Rhine would be complete without a Rüdesheim coffee, which was invented here.

Mainz bleibt Mainz (or ‘Mainz is always Mainz’) is more than a carnival motto. It is an expression of the easy-going way of life that makes the locals proud of their city, makes it easy for non-locals to settle in, and helps visitors to enjoy their stay here. With 2,000 years of history, Mainz is not just one of the oldest cities in Germany – it is also a place where you can see history come alive wherever you turn.

Frankfurt is known as the “Manhattan” of Europe due to its profusion of bankers and soaring skyscrapers, which co-exist with the city’s traditional Old Town architecture. Experience Frankfurt’s many contrasts today by visiting Germany’s oldest museum or taking a guided “Let’s Go” bike ride. Delve into exciting Frankfurt today. A major European financial and trade centre, vibrant Frankfurt boasts world-class museums, soaring skyscrapers, cozy wine taverns, and lovely parks. Choose a brief tour that gives you an overview or a more in-depth walking tour and then explore on your own. There’s a lot to discover, including a great bike path along the Main, if you’d like to get out and about for some exercise.

Today you will find yourself in Koblenz, a 2000-year-old town situated on the Rhine and Moselle rivers. Explore the Ehrenbreitstein Fortress, one of the main defenses against the French in the 19th century. Spend the afternoon sailing the Rhine Gorge, passing plenty of stunning castles and vineyards on the way to your next destination.

Founded by the Romans, Cologne is one of Germany’s oldest cities. Explore the old town with its beautiful squares, local markets, and historical monuments. The highlight of this stop is the magnificent World–Heritage-listed Gothic Cathedral. If you fancy going further afield book an excursion to Drachenburg Castle or Bruhl, famous for the Augustus Palace and Falkenlust.

Admire the bold modern architecture intermixed with classic 18th and 19th-century buildings. Rotterdam is the second-largest city in the Netherlands and it was completely rebuilt after WWII. As the largest port in the world, this city will draw you in with inspiring sights.

Utrecht is a city in the Netherlands, known for its medieval center. It has tree-lined canals, Christian monuments, and a venerable university. The iconic Domtoren, a 14th-century bell tower with city views, stands opposite the Gothic Cathedral of St. Martin on central Domplein square. The Museum Catharijneconvent shows religious art and artifacts in a former monastery

Your exciting Rhine cruise ends in Cologne, but your wonderful memories will last forever. As you disembark from the Arosa, may your way to the Cologne rail station for your scenic rail journey to Frankfurt International Airport for your return flight home or onward journey.

A-ROSA Silva is a 442-feet luxury ship that carries no more than 186 passengers for a more intimate and memorable journey. It has 89 cabins and 6 suites, all well-equipped with furnishings and in-room amenities that make one’s stay truly comfortable.

A-ROSA Silva features a sun deck where you can enjoy lots of sunshine on a comfy recliner or relax in an outdoor heated pool or whirlpool. On the sun deck, you will also find a shuffleboard, a large chessboard, and putting green. Enjoy stunning views from the indoor restaurant with floor-to-ceiling windows or from the outdoor café bar. You also will not want to miss the SPA-ROSA.

Meander through Magical Christmas Markets
Marvel at Frankfurt’s towering Christmas Tree
Enjoy mulled wine & Christmas baking in the town square
Take in the panorama of the Rhine Valley, dotted with castles
Sail into the centre of European Capitals on the Rhine River

Travel based on Cruise Departure 29 November 2022 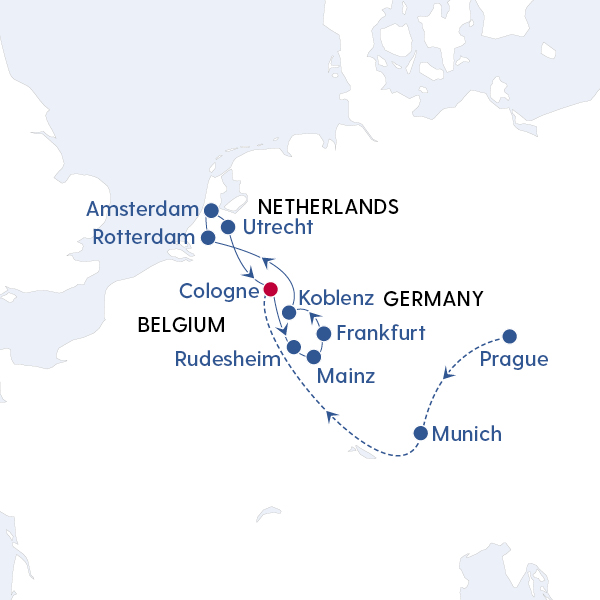